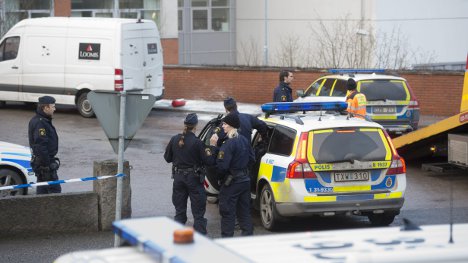 The robbery took place shortly after 6am in the suburb of Akalla when three masked men dressed in dark clothes made off with bags from an armoured car, fleeing the scene in a BMW.

"When they left the scene, they threw caltrops out which has left several cars in the area with punctured tyres," police spokesman Kjell Lindgren told the Aftonbladet newspaper.

Shortly after the robbery, the getaway was found in flames on a nearby roadway.

The robbery caused major delays on the E4 and E18 motorways, prompting police to urge commuters to take the train rather venture out on the roads.

"We've got a major police operation underway in the area, which means we're examining a number of different places," Lindgren told the TT news agency.

There have been no reports of any injuries in connection with the heist and no arrests have been made.

A spokeswoman for cash transit firm Loomis confirmed for the Expressen newspaper that one its trucks had been targeted in a robbery and that a number of bags were missing. However, she was unable to confirm what the missing bags may have contained.