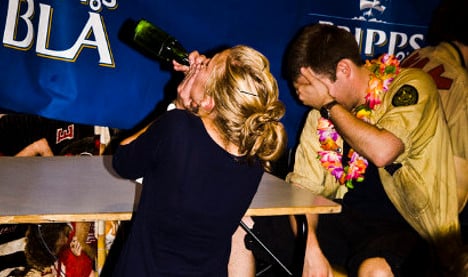 Young Swedes may not drink as much as people think. File photo: Mikeal Miettinen/Flickr

As part of the study, the blood-alcohol levels of 795 people in Stockholm between the ages of 18 and 30 were measured on Friday and Saturday nights, yielding an average of 0.74 per mille.

In a European comparison, the Stockholm results were about average. But young Brits out on the town proved to have markedly higher blood-alcohol levels: 1.3 per mille for men and 1.0 for women, the Dagens Nyheter (DN) newspaper reported.

The findings come from a comparison of blood-alcohol levels across Europe compiled by Stad (Stockholm Prevents Alcohol and Drug Problems), a partnership between the Stockholm County Council and Karolinska Institutet.

"We don't really have the same binge drinking culture that we used to have," he told DN.