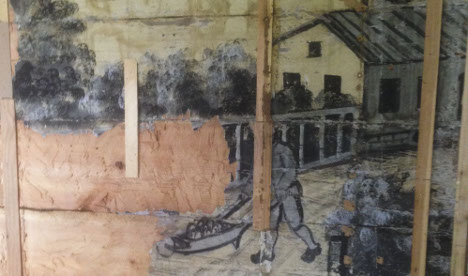 One part of the mural. See more in the attached gallery. Photo: Eva Nilsson/TT
The builders were working on the new toilet at the Gärdslösa vicarage in Öland, off Sweden's east coast, when they made the find. Members of the vicarage board were previously aware that there may have been paintings in the area, but were ecstatic when it proved to be true.
"I'm delighted, we all are," board member Anders Marell told The Local.
The one metre squared painting, which depicts a man pushing a wheelbarrow, a woman making hay, squirrels and a dog, did not fully survive a renovation during 1958 when the church was hosting Princess Christina's confirmation.
IN PICTURES: Take a closer look at the mural
"It's in pretty bad shape, unfortunately. They used an axe to demolish the wall when they were making new toilets and washing rooms for the princess," Marell explained.
The paintings are believed to depict the vicarage as it was back in the late 1700s. A local antiquarian confirmed that at the time, walls were typically painted immediately after construction was complete, and this building dates back to 1794.
The area is also well known for being the home of one of Sweden's most well-known poets, Erik Johan Stagnelius.
"It's exciting to think that he would have seen this picture. He is adored by Swedes… if he had have written in English he would be up there with Coleridge or Shelley, I can promise you that," Marell said.
As for now, the board plans to find a protective cover for the mural and to continue with construction.
"Guests will have to visit the toilet to see this marvellous painting," Marell told The Local with a chuckle.
"But there are other tactical problems. We aren't exactly wading in money here, it will probably cost a lot to preserve it, but we know it will be interesting for visitors. Let's hope it'll bring along a few extra coffee guests."