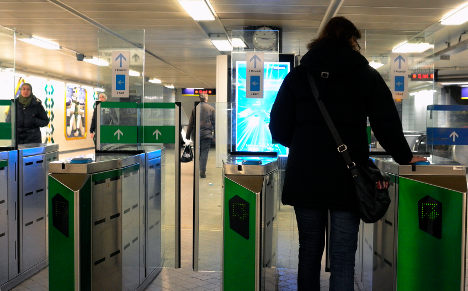 The man is suspected of following one rape victim out of the Fridhemsplan metro station. File photo: Hasse Holmberg/TT

The 23-year-old man has been held on remand since his arrest in January on suspicions he raped a woman on the island of Kungsholmen on December 22nd.

The man is believed to have followed his victim as she left the Fridhemsplan metro station before then forcing her into a rubbish room where he allegedly assaulted and raped her.

Now police suspect he may have committed several other rapes using the same approach, the Aftonbladet newspaper reports.

"He stalks the women and then later attacks them," an anonymous source told the newspaper.

The source likened the 23-year-old to the infamous Hagamannen ('Haga Man') serial rapist, who was convicted in 2006 for beating and raping several women in Umeå in northern Sweden.

Police suspect the man, whose mother is a police officer, has led a double life. Despite the man having a girlfriend and a well-paying job, police believe he made a habit of sneaking out of his flat in central Stockholm to rape women on Kungsholmen.

The man was arrested after police used DNA evidence to tie him to the December rape and are now looking into whether he may have committed other unsolved rape cases that have occurred in the area in recent months.

In July 2012, the 23-year-old was sentenced to two years in prison after being convicted of rape, but was released from prison in August 2013.

He was also convicted in three cases of paying for sex. While he admitted to buying sex, the man has denied involvement in the rapes.