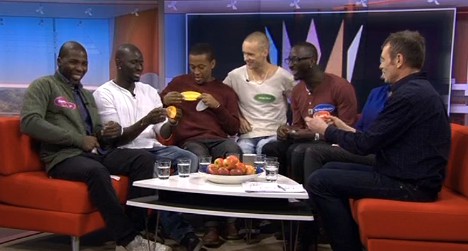 Photo: SVT screenshot
Swedish Afro hip-hop group Panetoz were guests on Gomorron Sverige ("Good Morning Sweden") on Monday morning after their success in Saturday night's Melodifestivalen heat. They were joined by co-winner Sanna Nielsen.
The host of the programme, John Chrispinsson, started the segment by admitting that he "had great difficulty remembering names" as he handed out name tags to all six singers on the sofa, four of whom had African heritage.
"I can't even pronounce Sanna Nielsen," Chrispinsson joked.
Sveriges Television (SVT) was slammed on social media after the show, with some accusing the station of discrimination.
Radio profile Cissi Wallin said she was "speechless" that such an incident could occur in Sweden in 2014. "How hard can it be to remember four names? Or write them down and just say the whole names just once? I'm talking about a public TV host," she tweeted.
Producers at the show were quick to apologize on Tuesday.
"We can only say sorry for this. I can't defend it any way. It's completely wrong," the show's managing director Ewa Lundin told the Dagens Media newspaper.
"It was a good idea on paper, perhaps. We have seldom had so many guests on our sofa. We just kind of pushed them all together," she said
She added that producers thought the band members' names were too long to appear digitally on the screen.
Panetoz, which describes itself as an "Afro hip-hop group", has members hailing from Gambia, Ethiopia, Angola, Congo and Finland, and includes members Pa Modou Badjie, Nebeyu Baheru, Johan Hirvi, Daniel Nzinga and Njol Badjie.
Lundin said that the editorial team responsible for the name tags hadn't thought about how the move could be perceived by the public.