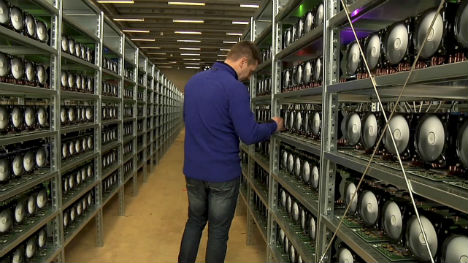 KnC Miner co-founder Andreas Kennemar inspecting his company's new hub in Boden. Photo: Elin Lindqvist/TT
The start-up, which has racked up $75 million in turnover since June, is building its new base in Boden, a stone's throw from Facebook's European data centre, close to the Arctic circle.
KnC Miner snapped up a former helicopter hangar used by the Swedish army for its new facility. The data centre is to be used for cloud services and for hosting of specialized Bitcoin mining hardware to a global client-base.
“We searched all over the world for a suitable place to build the first of many of our own mega data centres, and to find the best location lying right here in our home country is fantastic,” Sam Cole, one of the co-founders at KnC Miner, said in a statement.
The Swedish company has grown rapidly since it was founded last year in Stockholm. KnC Miner is a provider of hardware used in the mining of the digital currency Bitcoin, and the company boasts customers in 120 countries.
Bitcoin is a digital currency and peer-to-peer payment system introduced as open source software in 2009 by developer Satoshi Nakamoto. The currency uses cryptography to control the creation and transfer of money. The currency has enjoyed a boom in the past year, gaining significantly in value.
The choice to build in far northern Sweden was based on the conditions of the region, KnC Miner explained. Co-founder Cole said the team received an “incredible amount” of support from companies in the Node Pole area.
“Given that our business is in the digital mining sector it is also particularly suiting for us to set up operations in a community rooted in crude material mining, and today characterised by its budding technology sector,” added Sam Cole.
Work on the facility began in the past week, with the company saying in a press statement that it should be up and running within a few months.
The company added that it planned to build further tech hubs in the region later this year.