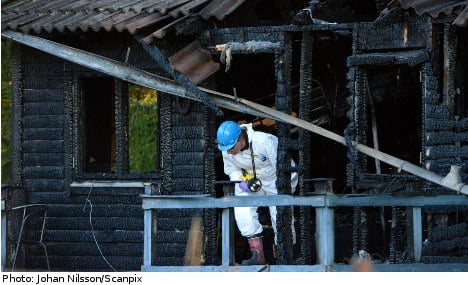 The two boys died in a cabin fire in Dalarö in the Stockholm archipelago in September, both from smoke inhalation. The suspected killer's third child, a seven-year-old girl, managed to escape and alert authorities.
The man admitted in October that he set the house on fire with the intention of killing the three children. He torched the cabin during the night when the children were asleep.
He was charged on Thursday with murder, attempted murder, and arson. Prosecutors said that the motive behind the fatal attacks was revenge against the children's mother, who had left him.
The father was arrested a day after the fire on the island of Öland after a huge manhunt including swat teams and police helicopters. He has undergone and passed psychiatric tests, meaning he will face jail time if convicted.
The hearing will be held in the Södertörn District Court between February 18th and 20th.
Dalarö lies in the Haninge municipality in southern Stockholm and is a popular summer holiday destination for Stockholm residents with a large number of wooden holiday homes on the 168 hectare island.