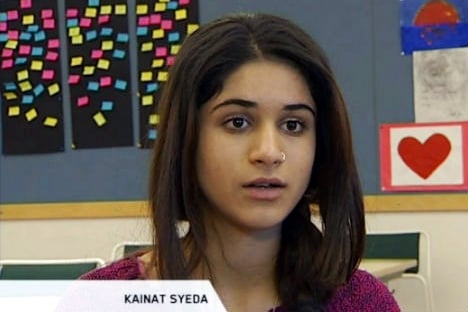 Kainat Syeda, 16, faced being sent back to Pakistan on February 15th with her mother. She has lived in the Stockholm suburb of Rinkeby for the past three years, and has been locked in a battle with The Migration Court of Appeals (Migrationsdomstolen) to secure permanent residency.

She claimed that if the deportation was carried through she would be forced to marry a man 25 years her senior and undergo genital mutilation in advance of any wedding.

However, the Swedish Migration Board (Migrationsverket) has stepped in to block the process citing new evidence. A new case for Syeda and her mother was registered with the board on Wednesday.

"When examining the family's asylum application neither the threat of forced marriage or genital mutilation was pleaded as grounds for asylum. Consequently, the details of the case were not known to the Migration Board or the court," the Migration Board said in a statement.

Swedish media reported that Syeda's birth father abandoned her as a child as he wanted a boy. Her mother met a new man, who had a residency permit in Sweden, and they moved to Rinkeby in northern Stockholm, but the man died suddenly in 2011 before he was able to adopt Syeda.

Syeda's attempts to remain in Sweden have sparked a social media campaign with a hashtag #låtkainatstanna (let Kainat stay) generating huge momentum online. A protest rally was due to be held in Rinkeby on Friday, just 24 hours before Syeda and her mother's original deportation date.

"My future is here, not in Pakistan. It's dark there," she told the Aftonbladet newspaper before the latest development in her deportation struggle..

Syeda added to the Nyheter24 news site "My uncle will marry me off and before that I will be mutilated," in relation to what she may face on her return home.

As a result of the new case being lodged the girl's deportation, along with that of her mother, will be stopped until further notice.