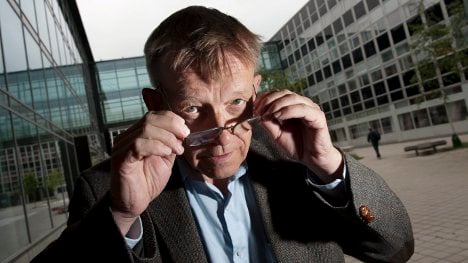 Hans Rosling. Photo: Jonas Ekströmer/TT
What is the average life expectancy in the world today – 50, 60, or 70 years?
If you guessed 70 then you're not only correct, but you're in the company of only 24 percent of Swedes (and 14 percent of Norwegians).
In fact, the 1,021 Swedes quizzed in Rosling's 2013 Ignorance Survey didn't fare too well overall. In one question about measles vaccinations, only eight percent chose the right answer out of the three options provided. Other results were as low as nine and 11 percent.
"Swedes aren't informed about the facts of the world," Rosling told The Local.
"No one tells them, and this is why I’ve been very successful in my lecturing. But my son, who is my boss in this, he said, 'you’re just famous, you’re not successful, because no one remembers the correct patterns in the world'."
Rosling said he blamed campaigners and the Swedish aid agency for the illiteracy.
"After my TV programme here with Skavlan, the head of the Swedish aid agency wrote in her blog that I was right, that they only talked about the suffering of people, and never about progress. It’s an attitude that the world consists of the West, which is decent, and the Rest, which is bad."
SEE ALSO: Read how Rosling compared Americans and chimpanzees in The Local Norway
The survey, launched last year by Rosling's Gapminder Foundation, aims to "promote a fact-based world view" by challenging people's misconceptions about world development.
It asks questions about basic global patterns and macro-trends, such as world population, poverty and birth rates, and has consistently found that people believe the world is in worse shape than it really is. The questions were asked to a panel in Sweden, Norway, the UK and the US.
It included questions on population predictions, solar power usage, and income distribution.
Despite the generally poor results, it may come as some comfort to Swedes that the kind of 'ignorance' the test reveals is not result from a lack of education, according to Rosling.
Indeed, Rosling made his name with a 2007 talk in which he argued that chimpanzees would statistically have done much better on his 'world test' than his students at the prestigious Karolinska Institute in Stockholm, where he still has the post of Professor of International Health.
"The problem for me was not ignorance," he told the audience in his famous TED talk. "It was preconceived ideas."
"I think that it's the failure to grasp that the new emerging world has countries on each and every level that makes people fail so badly on the world test."
Additional reporting from The Local Norway