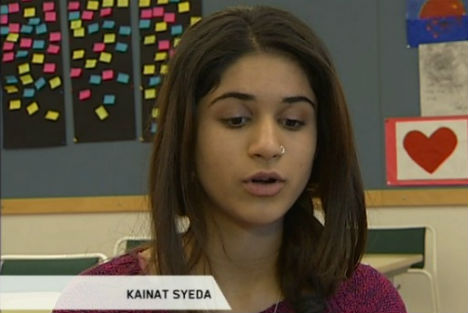 Kainat Syeda has been residing in the Stockholm suburb Rinkeby for the past three years, and has made repeated attempts to extend her stay to the The Migration Court of Appeals (Migrationsdomstolen).

However, her pleas for a residency permit were rejected and both her and her mother have been served with a deportation order for February 15th.

"My future is here, not in Pakistan. It's dark there," she told the Aftonbladet newspaper.

The teenager claims she will be forced into an arranged marriage when she returns to Pakistan and potential genital mutilation. News agency Reuters recently declared that Pakistan was the third most dangerous country in the world for women.

"My uncle will marry me off and before that I will be mutilated," the teenager told the Nyheter24 news site.

She added to Aftonbladet that her future husband was likely to be aged in his late 30s and that the threat of genital mutilation was very real.

"My uncle told me I must do that before I can get married," she said.

Swedish media reported that Syeda's birth father abandoned her as a child as he wanted a boy. Her mother met a new man, who had a residency permit in Sweden, and they moved to Rinkeby in northern Stockholm, but the man died suddenly in 2011 before he was able to adopt Syeda.

Since then the Pakistani family has faced an uphill struggle to remain in Sweden and has been in frequent contact with the Swedish Migration Board (Migrationsverket).

Syeda's attempts to remain in Sweden have sparked a social media campaign with a hashtag #låtkainatstanna (let Kainat stay) generating huge momentum online. A protest rally will be held in Rinkeby on Friday, just 24 hours before Syeda and her mother face deportation.

One of her classmates, who started the online campaign, told Nyheter24 that classmates were hopeful the teenager would remain in Sweden.

"We realized we had to do something… she has lived in Sweden for three years. I hope she'll stay," said Dzenan.

The protest rally will take place on February 14th at 5pm in Rinkeby square.