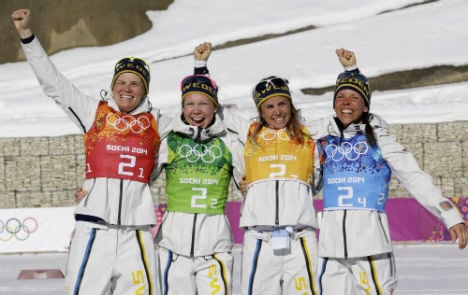 Charlotte Kalla, who took the final leg, was jumped on in jubilation by her near incredulous team-mates, Ida Ingemarsdotter, Emma Wiken and Anna Haag,when she collapsed on crossing the line.

Kalla overtook Krista Lahteenmaki of Finland and Denise Hermann of Germany, with a fearsome sprint in the home straight where she made up a 20 second deficit to chase down the Finns and the Germans.

Sweden finished on 53min 2.7sec with Finland taking silver 0.5sec behind. Germany took bronze on 53sec 3.6sec. But there was heartbreak for favourites Norway who could finish only fifth, 53.6sec off the pace.

A jubilant Kalla, who has already notched up two silver medals at the games, told Swedish media that motivating words from her coach spurred her on for the final stretch, where she grabbed the lead to give her country its first taste of gold at the 2014 Winter Olympics.

READ ALSO: Charlotte Kalla was this week's Swede of the Week

"I tried to open right, be controlled and make smart decisions along the way. I'd heard my coach say that I was the best in the world and that was an inspiration," Kalla told SVT after her victory.

Meanwhile, coach Richard Grip said that "it was too good to be true" while Urban Nilsson, waxing manager of the Swedish cross country skiing team, was also in high spirits after the win.

"These girls are incredible. What ladies we have! Being able to win the gold in this way, it makes tears fall," Nilsson told Viasat.

The gold means Sweden have now landed eight medals in total at the Winter Olympics.