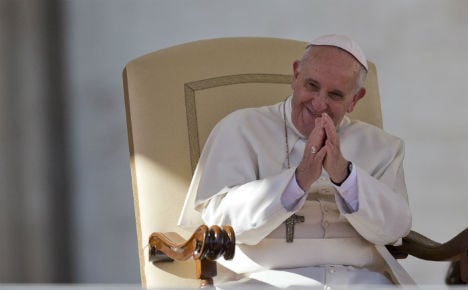 The pontiff made the comments after meeting two Argentinian brothers who moved to Sweden in the 70s to flee their nation's military dictatorship. Carlos and Rodolfo Luna chatted for an hour with their compatriot at the Vatican, where the new Pope spoke warmly about their adopted country.

He added that Sweden's policy on welcoming immigrants was at odds with other countries, who he claimed viewed them as a 'bad word.'

“We have so many refugees, but no one wants them. They are a ‘bad word.' Jesus was a refugee. He was not a tourist. It was not for work. He was fleeing death. A refugee," he said.

The current Pope, who succeeded Benedict XVI last March, was full of praise for Sweden who he said has "great saints" and said that it was "nice to find people with such a heart."

Speaking specifically about Sweden's immigration policy, he held the country up as an example for other nations to follow. Last September the Swedish government offered permanent residency to all Syrian refugees who had come to Sweden, in a move that was praised and criticized on both sides of the immigration debate.

"They do not have anyone in a concentration camp and other such terrifying places. That's an example we can present to the world. Because in reality it is the only country that is doing that, and is not filled with misery.

"It is not thereby suffering. This is the message Sweden presents. Open your heart to your brother, your sister, who has nowhere to live, to work, to sleep peacefully," he said.

Pope Francis hasn't ruled out visiting Sweden in future, which would be the first Papal visit in over two decades.

"I have to do so many things. I do not know. If God will give me time, I will go," said the Pope.

The late John Paul II came to Sweden in 1989 during a 10-day trip to the Nordic countries, where he met King Carl XVI Gustaf and Queen Silvia, and visited a cathedral in Stockholm.