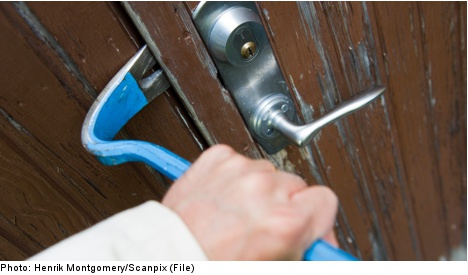 The thieves struck on Friday evening in Malmö where they, presumably, expected the couple's apartment to be empty. Valentine's Day is normally one the busiest days of the year for restaurants, and stats show that burglaries can shoot up by as much as 10 percent on February 14th.

However, the couple were not out dining when the robbers struck but were in bed watching a film. They heard a loud crash in the hallway as the burglars broke down their front door with a crowbar.

The shocked lovebirds looked on as the thieves entered their home and decided to help themselves to some electronic equipment.

"The burglars were equally surprised (to see the couple) but went in and took two computers that were on a table," Mats Thimgren of the Malmö police told newspaper Sydsvenskan.

It's understood that the man in the apartment attempted to tackle one of the Valentine's thieves but was unable to prevent them making off with their computers.

Sydsvenkan added that the man broke one of his windows by throwing a chair at the thieves as they made their escape.