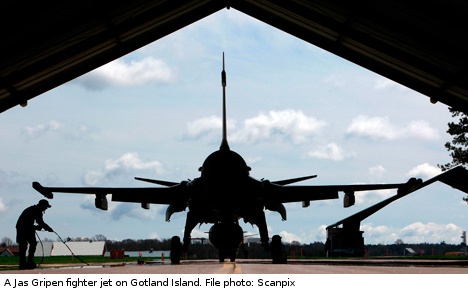 In an open letter on their website Switzerland's Christian Democrats said they could no longer spearhead the yes vote, citing ambiguities concerning Sweden, defence contractor Saab and their involvement in the referendum.

"For the CVP Switzerland it is clear: A vote must be conducted in Switzerland with its own means and argument," it said in a statement signed by party president Christophe Darbellay.

A referendum is due to be held in Switzerland on May 18th on on the country's purchase of Swedish-made Gripen fighter jets. However, the build-up to the vote has been marred by suggestions that Sweden is attempting to unduly influence a yes vote.

Swedish media reported in early February that a top-secret plan was hatched to sway the vote. Sveriges Radio (SR), citing classified documents, said that the Swedish ambassador in Switzerland "is arranging interviews and pitching positive articles about Sweden" to the Swiss press.

Meanwhile, in January defence contractor Saab was slammed for allegedly getting involved with the referendum. Swiss Social Democratic MP Evi Allemann claimed that Saab was financing campaigners in favour of the deal, and said that the company was behaving "shamelessly."

The Christian Democrat party, which claimed 12 percent of the vote in the last Swiss election, continues to back the Gripen deal but wants to avoid any suggestion of Swedish lobbying being an influence.

"We do not want any interference from the ambassador, from Sweden or from Saab," CVP politician Urs Schwaller is quoted as saying in the Swiss media.

In 2011, the Swiss government approved the 3.13 billion Swiss francs ($3.47 billion) deal to buy 22 new Jas Gripen fighter jet. But opponents forced a referendum on the Gripen purchase after submitting more than 65,000 valid signatures expressing their disapproval.

Polls have shown that a majority of voters oppose the Gripen deal but under Swiss law it cannot be blocked.