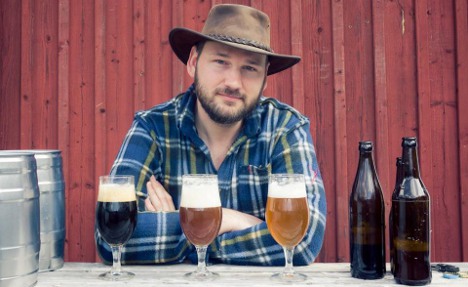 Kevin Zelnio with his beers. Photo: Linda Zelnio
Kevin Zelnio has a colourful past in the US. He worked as a marine biologist, a science writer, a science communication consultant, and even spent five years as a chef.
But in 2012, he threw it all in to start a new life with his Swedish wife and their two kids in Västervik, a town of 22,000 on the south-eastern coast of Sweden.
"I kinda moved here for love, I guess, but I'd been in love already for a decade," he tells The Local over the whirring of his brewery's air compressor (it's bottling day, he explains).
"And Sweden can't be beat when it comes to raising children."
On arrival, Zelnio tried his hand at home-brewing his own beer in an effort to save money while working as a freelance writer, giving samples (of the beer, not the writing) to friends and family to positive reviews.
"We live in the forest around 30 kilometres from the nearest Systembolaget. With all these beakers around me, mixing things together, sometimes I felt a bit like I was in Breaking Bad ," he says, referring to the hit US TV show about a retired chemistry teacher who turns to making crystal meth.
"But brewing beer is perfectly legal," he adds with a chuckle.
IN PICTURES: Watch the beer brewing process in action
As time passed, his interest for micro-breweries grew at the same speed as his distaste for the pay earned as a freelance writer in Sweden.
By 2013, he was in negotiations with a local hotel, Hotell Fängelset – an old prison from the 19th century – to open a microbrewery inside as a tourist attraction. By September, he had his permit for Bryggeri Fängelset and by October last year he sold his first bottle.
And the local market is slurping his brews down, as are curious beer lovers from Stockholm and Gothenburg. The beer couldn't have come sooner for Västervik, where Zelnio says there was a definite gap in the market for locally-brewed beer.
"Västervik is like a little Stockholm. People here fancy themselves as hipsters, in with the latest trends, for better or for worse," he says. "I saw there was literally a big gap in the map over Västervik when it came to Sweden's breweries and I knew I had to go for it."
As to how an American expat managed to open his own brewery after only a year-and-a-half in Sweden, Zelnio puts it down to knowing the right people, getting help from a clued-in Swede, and sporting a non-Swedish attitude.
"My Americanness has definitely helped. Some of the things I've done to get this off the ground are things Swedes tell me they'd never do. Like, I didn't stop calling the Swedish Tax Agency when other people might have just accepted whatever they were told. I went around giving samples to everyone. These are things I just figured you should be doing as a business owner," he says.
He adds that a Swedish network is extremely valuable, and that anyone coming to Sweden for love should turn to their family and friends before trying to build expat networks.
"Be courteous, but use your family's network as much as possible."
He is also quick to add that his success wouldn't have been possible without the help of a Swedish business partner. His partner owns 25 percent of the business and has made "the world of the difference" in navigating the financial and tax system here, he explains.
"Having a local here who already knows the business layout, the accounting system and keeps my numbers in line – as well as watching out for my bottom line – has been tremendous. I'd recommend finding a solid business partner with expertise to help navigate new financial territory."
But what about the beer?
"Sweden and Scandinavia in general are the most progressive in Europe when it comes to beer and diversity. They're even rivaling the UK. And Swedish microbreweries are in the process of taking a page from those in the States in what they brew and how they market it. As an American in Sweden, I exploit it, naturally."
The only things that hurt the business are Sweden's high alcohol taxes and Swedes' proclivity for buying a cheap "stor stark" instead of coughing up a little extra for something good.
He adds that Sweden has a strong culinary approach to beer too, with leading newspapers offering regular recommendations that are paired with suitable food choices.
So what next for the American and his beers?
"Well, we've got six styles now with more on the way. We're hoping to get into Systembolaget on April 1st. Then, or so I've heard, anyone in Sweden can buy our beer," he tells The Local.
"Though at the moment, I'm not sure our little brewery would manage."