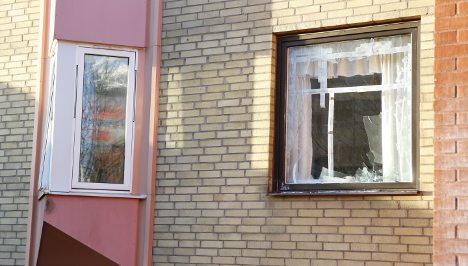 The aftermath of the Malmö explosion. Photo: Drago Prvulovic/TT
No one was injured and police say there is no connection between the blasts.
The first of the explosions shook the Arlöv area on the outskirts of Malmö, Sweden's third largest city.
"Some kind of explosive has gone off and shattered a window in an apartment block," Marie Keismar of the Skåne police told Sveriges Television (SVT). "Our first thought is that something has been put outside the window."
Several people were inside the building at the time of the blast, but no one was injured.
"We will speak with the apartment's residents, I don't know if there is any kind of threat yet," Keismar added.
The crime has been labelled as as an attempt at public devastation (allmänfarlig ödeläggelse) and a forensic investigation is underway.
Roughly 60 kilometres further east in Ystad, on the southern coast of Sweden, another blast hit a home in the centre of the town.
"We have information that an explosive has been left by an outside door. The man who lives there was not physically injured, but the floor and the building was damaged," Keismar told the TT news agency.
Even though the explosions occurred at roughly the same time, police do not believe there is any connection between the two.