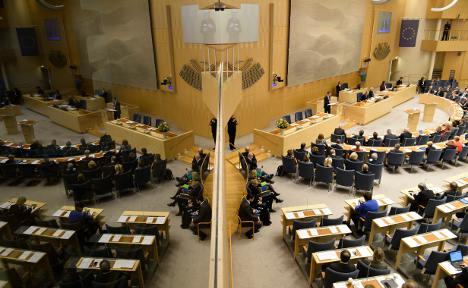 A view inside Sweden's parliament, the Riksdag. Photo: Anders Wiklund/TT

You can accuse Swedish politicians of many things. But rarely of being intellectually honest during an election year. Recently Ibrahim Baylan, education policy spokesman for the Social Democrats, met his Moderate Party counterpart Tomas Tobé in a heated debate on Sveriges Telvistion (SVT). It was a great chance for the two to discuss the many problems facing Sweden's failing school system.

Sadly, the opportunity was wasted.

Things got off track when Baylan accused the Moderates of prioritizing lower taxes ahead of devoting more money to schools. At first glance, the claim may sound reasonable. But in fact, the center-right government has reduced taxation through one key reform: less generosity in the sick- and disability leave system. Funding for schools has actually increased over the years the Moderate-led Alliance coalition has been in power. Meanwhile, the local taxes that pay for schools and other welfare services have not been cut. And for technical reasons, tax reductions in the state-level can actually lead to more money for local authorities.

Tobé then responded by accusing the Social Democrats of prioritizing public handouts rather than creating more jobs. Again, this might initially appear to be a reasonably effective argument for someone from a center-right party trying to rebut someone left of centre. But what does it have to do with schools? Besides, if we take the parties at their word, the Moderates are considering raising taxes whilst the Social Democrats promise not to focus on handouts as an alternative to work.

Thus, Baylan and Tobé turned what could have been debate about a major issue facing voters – the state of Sweden's schools – into a spat about economic policies they suspect their opponents have, but which their opponents deny having.

Following the spectacle, columnist Sam Sundberg of Svenska Dagbladet (SvD) lamented over having a special "embarrassment pillow" on his couch behind which he tries hide when debates derail in the way that Baylan's and Tobé's did. I am sure he will have use for it in the months ahead if Sweden's major parties continue with such tactics.

It makes one wonder whether the Sweden's political parties are actually more interested in taking cheap shots at their opponents rather than actually engaging in a serious discussion about the issues. And when it comes to looking for answers as to why Sweden's schools have suffered so much in recent years, perhaps the simplistic and intellectually dishonest climate surrounding Swedish political debate is a sensible place to start.