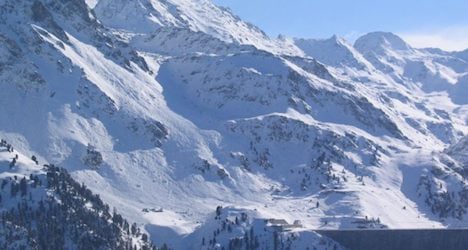 View of terrain where Swedish skier got into trouble. Photo: Valais cantonal police

The man was skiing at Mont-Fort, part of the Quatre Vallées ski complex in the canton of Valais, when he ventured off piste with three colleagues, also from Sweden, Valais cantonal police said.

While heading downhill near the Cleuson dam, the man was swept away by an avalanche and thrown against a tree at around 5pm, police said in a news release.

His colleagues succeeded in digging him out from the snow but he succumbed to his injuries, according to the release.

An emergency rescue team arrived and transported him by helicopter to Sion hospital where he was pronounced dead, police said.

Last week, 39-year-old British expat skier Chris Longbottom, a resident of Zurich, died in the Col de Forclaz area of Valais after an avalanche 200 metres lomng and 50 metres wide buried him under three metres of snow.

Another 65-year-old British skier died a day later while skiing off-piste in the Vercorin region of Valais.

On average 25 people die each year in avalanches in Switzerland according to the Swiss Federal Institute for Forest, Snow and Landscape Research (WSL).