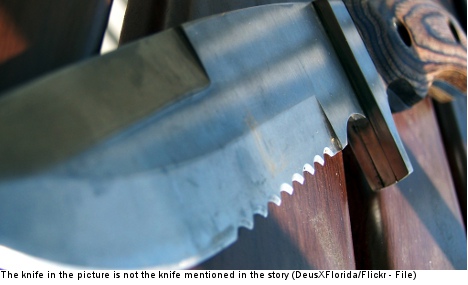 Patrols came upon the injured roe deer in the early hours of Tuesday morning when responding to a call about a car-deer collision on the E4 motorway near Getå.

Once on the scene, the officers could see that the animal was severely injured and would not likely survive. One officer then pulled a knife with the intent of putting the deer out of its misery.

But instead of ending the deer's suffering, the officer found himself with some suffering of his own after he somehow managed to plunge the knife deep into his own thigh.

"I don't know exactly what happened, that's something the forthcoming investigation will reveal."

The officer's self-inflicted stab wound required a trip to hospital where doctors explained he should consider himself lucky that the blade didn't hit any major arteries. The officer was released a few hours later after doctors stitched up the wound, which has since been classified as a work-related injury.

Kliman explained that it's quite common for officers to be called to the scene of accidents involving wildlife on Sweden's roads. However, this particular officer's decision to take care of the situation himself – and to use a knife rather than a firearm – is anything but common.

"Usually, we call a hunter to track and kill the animal. It's not that common for an officer to deal with the matter himself," he told NT.