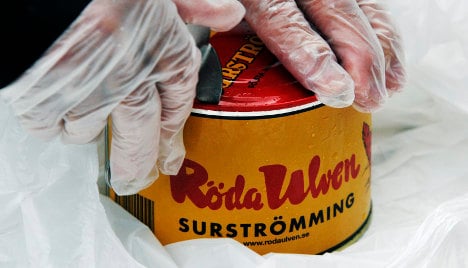 The tin in this picture is not the Norwegian tin in the story. Photo: Hasse Holmberg/TT
"This is the most exciting thing I've been a part of in my entire life… when it comes to surströmming," Ruben Madsen from Sweden’s Surströmming Academy announced as he prepared to open a 25-year-old tin in front of camera crews from Norway, Sweden and Germany.
The foreign press was on hand after new of the forgotten fermented herring tin, which was found in the rooftop of a Norwegian cottage and rumoured to be at risk of exploding, went viral.
When the can was finally opened, the onlookers gasped at the sudden, appalling odour.
"The smell was terrible," Madsen told The Local Norway soon after. "At first when I opened the can, it smelt really good, but within 15, 20, 30 seconds, when the oxygen started to affect the brine, it started to smell really, really bad. Normally surströmming smells really aggressive, but this was worse."
However, to his disappointment, once he studied the contents of the can, he discovered that twelve fish that were once inside the can had dissolved into the brine.
"It was impossible to eat. It was some kind of rotten porridge," he said.
Cottage owner Bjørg Hennum was pleased with the turnout, and enjoyed hosting the 80 or so journalists and surströmming aficionados who had come to witness the event.
"It was a good atmosphere," she told The Local, adding that the smell had already dissipated in the winter air. "It smelt a little bit, but now it's OK. I can't say what it smelt like but it was not good."

Read the full story on The Local Norway