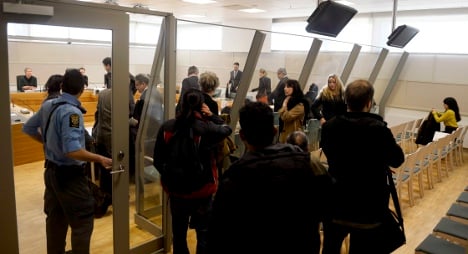 The scene at the Solna District Court on Tuesday. Photo: Leif R Jansson / TT
The couple stood trial in the Solna District Court on Tuesday on charges of gross violation of their children's integrity (grov fridskränkning) and for assault.
The father said during an interrogation that he only hit his children the second time that they had done something wrong in an effort to "discipline them".
The children's statements suggested that the mother had repeatedly beat them.
"She started hitting me in the back and on the leg. Then she pinched me on the ear and hit me on the head," one of the children said.
"I've become used to being hit by mum," said another of the children, adding that the beatings no longer hurt due to their frequency.
The children said that the mother hit them over a period of several years with a belt, a coat hanger, and a piece of wood. The mother denies the majority of the accusations and claims to have only hit one child once.
She has been charged with gross violation of their children's integrity against all four children. The father is charged with the same against three children, and assault against the fourth.
The trial is being watched over by several members of the Malaysian embassy, including the ambassador, and is being translated.
The Malaysian parents were arrested in December last year and have been held on remand ever since. The four children were returned home to Malaysia, where a media storm has erupted, and where protest movements have gained wind on Facebook and Twitter.
The couple has lived in Sweden for three years. The father, Azizul Raheem Awalludin, works for Tourism Malaysia in Stockholm and has worked for his country's tourism ministry since 2000.
His wife, Shalwati Nurshal, is a secondary school teacher on unpaid leave. The Swedish foreign ministry said neither Awalludin nor Nurshal are registered as diplomats, leading prosecutors to conclude that diplomatic immunity does not apply in the case.
Mirza Mohammad Taiyab, the head of Tourism Malaysia in Stockholm, is critical of the fact that the parents have sat in jail for so long.
"I think the whole process could have been more effective. Keeping them detained for two months has been an unpleasant experience," he told the TT news agency during a pause at Tuesday's court proceedings.
Kristofer Stahre, the mother's defence lawyer, told The Local recently that the situation was the result of a "clash of cultures".
Sweden was the first country in the world to outlaw corporal punishment back in 1979. In Muslim-majority Malaysia, corporal punishment is allowed in schools.
The case is not the first time a diplomat from abroad has got caught on the wrong side of the saw. In 2011, an Italian politician was convicted for assaulting his son during a Stockholm holiday, in a case that stirred heated debate in Sweden and Italy. 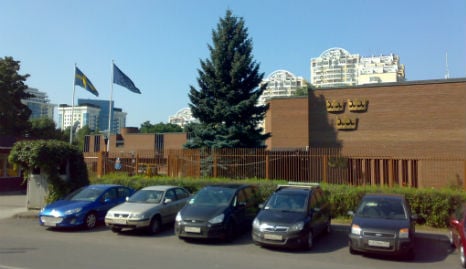