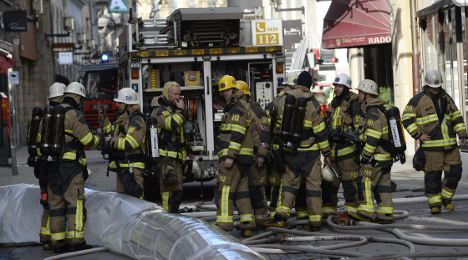 Firefighters on the scene. Photo: Leif R Jansson/TT
"The fire alarm went off and when we came out we saw there was an incredible amount of smoke," Alex El-Shubaki, who works in a café inside the scorched building, told the TT news agency.
"You naturally fear that people have been injured."
IN PICTURES: See more photos from the scene of the fire
The blaze began in the Zink Grill restaurant on Biblioteksgatan in Stockholm's upmarket Östermalm area. As the blaze spread, the area was evacuated by police, but no one was reported injured.
Firefighters managed to get the fire under control quickly and extinguished them within an hour. They explained that the flames spread from the restaurant's chimney and into the building.
Police on the scene told TT  that they did not suspect any foul play, and would now launch an investigation. However, it remains unclear what started the blaze or whether or not staff from the restaurant were working in the kitchen at the time.