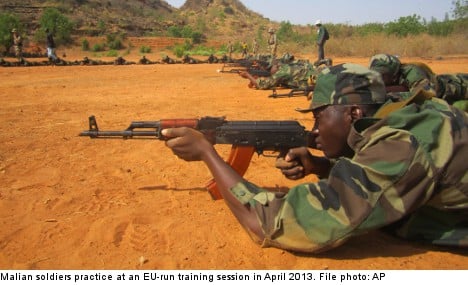 The United Nations asked the Swedish government if it could spare some military might to assist with peace-keeping operations in Mali, specifically in the intelligence and information gathering departments.
"We want to answer this in a positive way," Carl Bildt told the TT news agency.
Bildt said "several hundred" Swedish troops could be called upon to lend a hand, but not in direct combat positions. He added that the soldiers could even need protection.
The minister informed the parliament's advisory council on foreign affairs about the plans, which would need a parliamentary green light to come into fruition. The government is working towards to proposing a bill on the matter, which could be ready as early as spring this year.
"We need more detailed information before we can put out a proposition," said Bildt, who was in Mali as recently as this weekend.
"It's my stance that if we're going to send soldiers somewhere and it's my responsibility to put a proposal to the parliament, then I want to know what I'm talking about and to have been there," he explained.
The government is currently looking into the price tag for such a mission, with a rule of thumb stating that it costs around 1 million kronor ($154,000) per soldier per year.
The opposition Social Democrats are willing to support a proposition of sending Swedish troops to the west African nation, where the UN is mainly concentrating on Timbuktu, Gao, and Kidal.
"It's important that we show up when the UN comes calling. If Sweden has the resources, the soldiers, and the knowledge, then we think it's reasonable for the UN to ask for help," Urban Ahlin, the party's foreign policy spokesman, told TT.
In June 2013, the Swedish parliament approved sending up to 160 troops to Mali for a maximum of one year to  support the UN peacekeeping mission there.