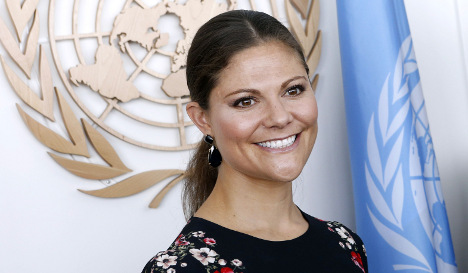 Princess Victoria of Sweden poses for photos during a visit to UN headquarters. Photo: AP
King Carl Gustaf XVII, who is turning 68 in April, should abdicate this year. At least that's what 48 percent of Swedes answered in a survey carried out by pollsters Demoskop and commissioned by the Expressen newspaper.
A similar survey from 2011 saw 38 percent of Sweden saying the same thing, meaning Wednesday's figures marked a ten-percent hike.
But it's not so much that the Swedes are losing interest in the king, rather that they're falling more in love with Crown Princess Victoria, says Roger Lundgren, royal expert and editor of Kungliga Magazine.
"Swedes love Victoria. She is Sweden's most popular person and everyone adores her," he told The Local, adding that the birth of Princess Estelle in 2012 did nothing but boost Victoria's popularity in Sweden and the world.
"Plus Victoria is young, and besides, everyone likes something new."
IN PICTURES: Cute pics of Princess Estelle
He pointed to a similar trend in Denmark, where the public has fallen for the prince over the reigning queen.
Despite the growing trend in the statistics, Lundgren doesn't think the king is likely to abdicate at all.
"Scandinavian monarchy is similar to that of the UK. They see it as a position for life, just like the Queen of England," he explained.
He added that he doesn't think Swedes are growing tired of the king either, and that his recent visit to the winter Olympics in Sochi showed the public his best side – when he is "loose and relaxed".
If and when Victoria takes the throne, she will be Sweden's fourth queen regnant and the first since 1720.
Wednesday's survey results were based on 1,011 responses from Swedes over the age of 18. They were contacted in late January, told that the king will soon be 68, and were asked if "he should retire and be replaced on the throne by Victoria".