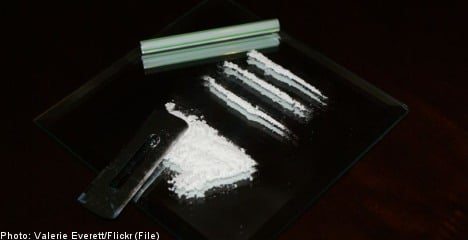 The network operates in Vårberg, south of the capital, with as many as 40 children moving cannabis, cocaine, and amphetamines. Police say the children have no choice but to be part of the drug running.
"The young people are being threatened to carry out these crimes," Jonny Petersson of the Skärholmen police told the Mitti newspaper.
"Those who are older, 13 or so, can be rewarded with drugs if they've created enough successful business."
Police are planning to send in 25 plain-clothed officers in the spring to put a stop to, monitor, and then dismantle the network.
The group is headed by several men in their twenties who are well known to police already. Officers believe they're using the children as drug mules in the knowledge that youngsters can escape without punishment if caught.
"It's serious that they are so young, it's completely unacceptable," Petersson told the TT news agency. "We have to make every effort to ensure we put a stop to this."
When the local Mitti newspaper approached young children believed to be involved in the peddling, many gave the same answer: "I don't know what you're talking about."
Two men in their twenties believed to be in charge of the drug operations said that the southern Stockholm suburb was beyond police control.
"There are drugs everywhere here. It's really easy to get your hands on them. No one would care if I just decided to smoke a joint in the middle of the shopping centre," one of them said.
"At nights this whole area is totally perfumed. Police can't do anything about it. Vårberg is the new Christiana," he added, referring to the subsection of Denmark's Copenhagen where police turn a blind eye and where drug use is openly practiced.