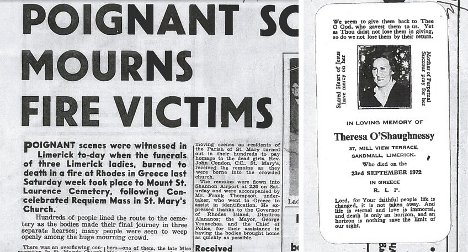 A newspaper clipping from a local newspaper after the fire, and the obituary notice of Theresa O'Shaughnessy
In late September, 1972, the Oscar restaurant on the Greek island of Rhodes burned to the ground. A faulty electrical system and highly flammable bamboo walls meant the building was torched within minutes.
Among the 33 dead patrons were over 20 Scandinavian tourists from Sweden and Denmark. Together with three Greeks and two other Irish tourists, 36-year-old Irish woman Theresa O'Shaughnessy also perished.
Over 40 years on, O'Shaughnessy's relatives made a recent trip from Limerick to Rhodes to pay their respects, but were astonished to find that there was no memorial at the scene of the fire.
"We were shocked and saddened to see there was no memorial to all of these victims," O'Shaughnessy's 45-year-old nephew Pádraig Power told The Local. "This was a tragedy on massive proportion and there should be some mark of respect to these victims."
Power is now on the hunt for relatives of the Swedes and the Danes who perished in the blaze to get their blessing and support in making a memorial – even if it's just a plaque on the wall of the jewellers that now stands in the place of the restaurant.
But, despite the backing of Ireland's Foreign Ministry, the search is going slowly. Power has had no luck finding a single relative of the deceased Swedes. The Local's efforts to get help from the Sweden's Foreign Ministry also proved fruitless.
"Even if I could find the information, I can't share it," a spokesman said.
Power is now taking it upon himself to get the ball rolling and to jog the Swedish public's memory. And what's more, he doesn't have much time.
"This is really important to me personally because my mother is 84 and we've been speaking about it recently. If my mother passes on…" he said before drifting off into silence.
"It's been over 41 years, but it's still a sensitive subject. My grandfather died a few years after the incident of a broken heart. My aunt was the youngest in the family. We hope to have a memorial erected while my mother and her siblings are still with us," he explained.
Power's aunt was so badly burnt in the fire that she was unidentifiable, even through dental records.
"To be honest with you, we don't even know if her body came back. It was more of a process of elimination with the help of a woman from Dublin who had been with them that night. She managed to jump out the window and escape with only broken bones."
Now, Power can only wait and see if the Swedes will answer the call to help.
"If any of the Swedish families feel the same same sense of loss as we do, we'd love for them to come forward to help the cause," he said.
The Irish Foreign Ministry has already sent a letter to the mayor of Rhodes, while Power and his family hope the Swedes and the Swedish government proves to feel as passionately about the matter.
"I personally would feel that it would be a failure in our quest if everybody didn't get a mention in the memorial," he told The Local. "This is still emotional, even though it's been such a long time. We want them remembered, that's all."