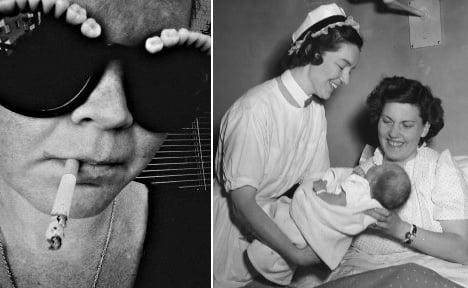 Anna Karin Eriksson works as a nurse and writes on her blog Blixa that her job has allowed her to develop an undramatic view of her body and those of others. But that didn't prepare her for the effect of her second vaginal birth.

It would take alcohol, writing her own referral, and holding the dogma of "childbirth is natural" of the maternity health system to account for her to realize she was far from alone.

The sensitive would do well to hit Ctrl + W now, for here are her symptoms: Eriksson cannot defecate without inserting her finger in her vagina and holding it against the membrane that separates it from the rectum.

"At times when I've been constipated, I've even been able to feel the poop pressing into my vagina," she wrote in a blog post that would go on to go viral, accruing 12,000 likes.

So what did she do? She got drunk and told her friends. And some of them said they had experienced the same thing. From there, Eriksson, who describes herself as a feminist nurse who long since retired her razor to gather dust on the bathroom shelf, took matters into her own hands and wrote herself a referral to a specialist women's clinic. The answer there that rectocele – the weakening of the membrane in question – was common, normal, and not dangerous did little to soothe her. Instead, it appears to have infuriated her.

"Everything within pussycare is TOOOOOOTALLY NOOOOORMAL…. it's normal to rip from A to Z, it is totally normal to have a pocket of poop in your pussy, it's normal to become urine and fecal incontinent, it's normal that your sex life is screwed for life, and it's normal that half of all pussy-owners who give birth vaginally end up with permanent damage afterwards," Eriksson wrote in a diatribe that almost reverberated with the force of her typing.

The sarcasm-laced fury earned her mostly praise in the comments section that quickly filled up with praise for her rancour and candour.

The timing was also impeccable when it came to kickstarting a debate in Sweden about the physical toll on women who give birth. On Monday, Sahlgrenska University Hosptial researcher Maria Gyhagen said that staff in maternity care, or as Eriksson would have it  "pussycare", tended not to report all injuries that occur during child birth.

"We have a tendency to under-report and undervalue the injuries," Gyhagen told Sveriges Television (SVT) as she revealed research that one in two Swedish women will suffer some sort of birth-induced injury or damage in their lifetime.

Thus Eriksson's furious blog post gave a public face to anonymous statistics presented this week, and the nurse asked whether the situation shouldn't be changed?

"When you hear that there are women who are literally told that it's totally normal to have their ripped bowels hanging out of their ****, then you start to wonder," she wrote.

The answer, the mother-of-two wrote, was to start some kind of Pussy Revolution.

"But as we await this budding revolution and as I await my appointment with a gynaecologist to assess whether I'm eligible for an operation or not, maybe we can start talking about this. How are your pussies doing?"

Eriksson also spoke with SVT, whose interview with the nurse achieved decent virality, that many of women who contacted her were quite young. And their answers ranged from ruptures "that make them feel mutilated"  to aching "sex-life destroying" scars and incontinence.

"It isn't normal to wet yourself and not be able to jump or run or live a full life," she told SVT. "Some of the (women) who've written to me are 23 years old."