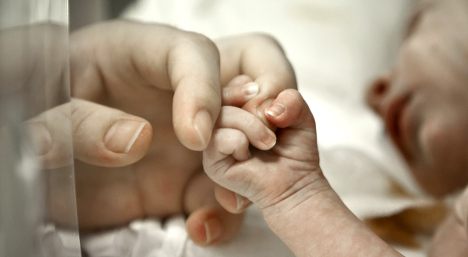 A newborn baby. Perhaps called Anna. Photo: AP
Do you know a Swedish woman called Anna? You're not alone. There were over 108,000 registered as living in Sweden last year, according to new figures from Statistics Sweden (Statistiska Centralbyrån – SCB).
But the news comes as no surprise, as Anna has topped the charts since records began.
As for the men, Lars took home the top spot as it has since 2001, with over 95,000 of them in Sweden last year.
But the list has seen some changes over the last 15 years, with more traditional names like Ulla, Inger, Sven and Hans dropping out of the top ten to be replaced by Emma, Sara, Peter and Thomas.
When it comes to surnames, Andersson remained the most common, followed by Johansson, which has been the case since 2012 when the Johanssons were kicked off the perch by the Anderssons for the first time.
Two names made the top 100 for the first time in 2013 records, with Ali and Mohamed cropping up 81st and 83rd respectively.