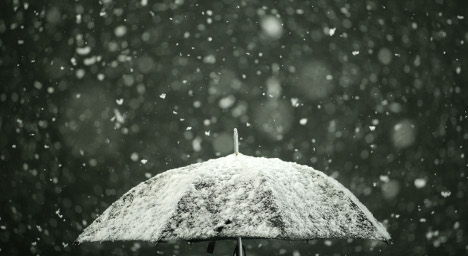 Photo: AP
Sweden's weather agency SMHI issued a class one warning on Friday, meaning the weather may cause danger for the public and damage to societal functions.
The warning applies for everywhere north of Dalarna and most of the Baltic sea of the country's east coast.
Sweden's Traffic Agency (Trafikverket) warned motorists to be careful on Friday and throughout the weekend due to potentially slippery roads.
"It's important to keep updated, make sure you have the right equipment and plenty of time if you're driving today," spokeswoman Bodil Sonesson told the TT news agency.
Several motorists have already succumbed to the winter conditions, and one truck drove off the road in Vansbro, central Sweden. No one was injured.
With the annual Vasaloppet cross-country ski race coming up, the agency warned of a significant increase in traffic around Sälen and Mora in central Sweden.
See the forecast in your corner of Sweden
The snow has also been pummeling Stockholm throughout Friday, but those living further south can look forward to a spot of sunshine over the weekend.
"Southern Sweden can expect some mild weather on the way," said Linnea Rehn, meteorologist at Sweden's weather agency SMHI.
The snow is expected to stop falling in the north by Saturday afternoon, and anyone planning to make the most of the upcoming sports break can expect plenty of snow across Norrland and even a touch of sunshine.