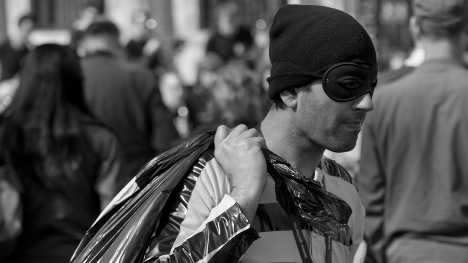 The burglar in this picture is not a real burglar in Sweden. Photo: John Fisher ARPS/Flickr
There is never a higher risk for home break-ins than during the winter sports break (sportlov), insurance company Trygg-Hansa said on Friday, pointing to an eight percent hike in burglaries nationwide during the period.
Sweden's winter break is a week-long period, usually taken in February or March, where families are encouraged to take part in winter activities.
But experts warned that thieves make the most of the empty homes across the country.
"This is just a hypothesis," Trygg Hansa spokesman Johan Eriksson told the TT news agency. "But the main reason why there are more burglaries is because the criminals are becoming more organized."
"As many people are away it's an opportune time for them."
Worst hit is usually Skåne in southern Sweden, where residents suffer 26 percent more break-ins than during a usual week. Stockholm sees a 19 percent increase during the holiday, while Västa Götaland sees a five percent hike.
Anders Rydberg, a spokesman at the national police, offered several suggestions to outsmart any prospective thieves.
"Don't go around telling everyone that you're away, even thieves can do research on social media," he said, adding that it's wiser to inform your neighbours than your Facebook friends.
He also advised Swedes to think like thieves in order to protect their homes.
"You have to think: If I was a burglar, where would I break in? Where is the weakest spot? And then you can work to make the job harder for them."