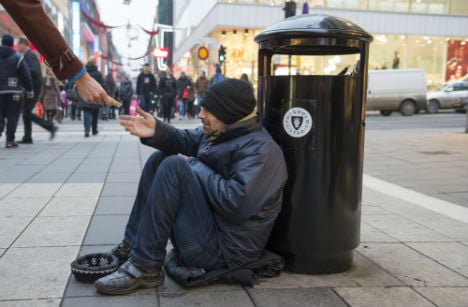 The trio had previously been prosecuted for begging on the streets of Södertälje, Stockholm county, in January. In court it was debated whether the three individuals had broken any local laws regarding the collection of money.

Local newspaper Länstidningen said that the case was unique as the issue has never been tested before by law.

According to local Södertälje regulations police permission is required for the "collection of money in boxes or similar." In court the example of street musicians, who don't require police permission, was raised and comparisons were made between the beggars and street performers.

The local district court cleared the three Romanians saying their activities constituted "passive fundraising" and didn't require permission from the police in order to ask for money on the streets.

The court subsequently rejected the previous charges and acquitted the three individuals.

Earlier in February the Romanian ambassador to Sweden called for a begging ban while two Liberal party politicians suggested that Romania should foot the bill for citizens who travel to Sweden to beg.

That it is permitted to beg in Sweden "does not facilitate Romania's efforts to achieve social inclusion and increased employability," Raduta Matache, Romania's ambassador to Sweden, wrote in a debate article for Dagens Nyheter recently.

It is estimated that there are 34,000 homeless people in Sweden. Soup kitchens have been set up in the larger cities over the past two years to tackle the issue.

The Romanian Health Minister Eugen Nicolaescu is due to visit Sweden in March to discuss the issue.