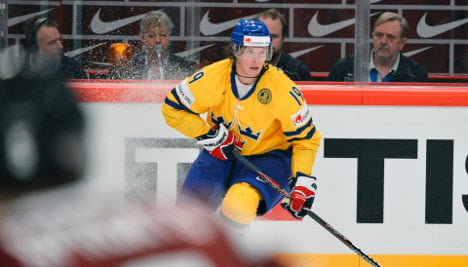 Nicklas Bäckström playing against Latvia. He was banned from Sunday's game due to drug use. Photo: Anders Wiklund/TT
Swedish national hockey team general manger Tommy Boustedt made the accusation after forward Nicklas Bäckström tested positive for an allergy medication.
Boustedt slammed the IOC doping officials saying they likely knew Bäckström's positive result sooner but delayed telling anyone because they wanted to wait until just before the Sochi Olympics showcase event, the gold medal hockey game.
That way they could better promote for their ongoing fight against drug cheats, he claimed.
"My suspicion is that this is political," said Boustedt at a news conference at the Bolshoi Ice Dome arena following their 3-0 loss to Canada in the gold medal game.
"I think they waited until it would be a real good impact with you journalists. I think they had the results earlier but chose to hold onto them. They need examples to show they don't accept doping but this isn't it. It is awful."
The IOC did not attend Sunday's news conference.
Swedish forward Bäckström was notified of the failed drug test just a couple of hours before Sweden was scheduled to play Canada in the championship game.
Mark Aubry, chief medical officer for the International Ice Hockey Federation, said Bäckström tested positive for high levels of Pseudoephedrine.
Aubry said the drug was in an allergy and decongestant product Bäckström uses and is only illegal if the test score is above a certain level.
Bäckström was tested Wednesday night after Sweden's quarter-final but the team was not informed that he would be suspended until over three days later and just hours before the gold medal match.
Boustedt said they only have the results of Bäckström's A sample and they wanted more time to get the B sample tested.
'IOC has destroyed one of Sweden's great days'
"We are all very upset. Our feeling is the IOC has destroyed one of the greatest hockey days in Swedish history," Boustedt said.
Washington Capitals forward Bäckström, said he has been taking the same allergy medication for seven years and passed all the previous tests, including over two dozen tests conducted by National Hockey League's doping
officials.
"I have nothing to hide," said Bäckström, who was tied for second in scoring on Sweden heading into the final.
"I have allergy problems. It was shocking to me. I feel I haven't done anything wrong or anything different that I did the last seven years."
Aubry defended Bäckström saying he is an "innocent victim".
"We feel strongly that he is an innocent victim of circumstances," said Aubry. "That substance is only banned if it goes over a certain level."
Aubry said Bäckström had listed the drug on his medical forms.
"As a medical person there is no doping in this instance," Aubry said.
Swedish coach Pär Mårts also accused the IOC of botching the matter.
"It sucks," Mårts said. "It is like kindergarten. There are rules to follow and they didn't. The IOC is making things up here."
Boustedt said he doesn't know if they would have beaten Canada Sunday with Bäckström in the lineup but not having him had a big impact on the team.
"Canada played fantastic so it might not have affected the outcome but it affected our team," he said. "It was tough to lose him that close to the game. The players were really upset."
Swedes said Bäckström's A sample came back positive but because of the late notice there was no time to test for the B sample.