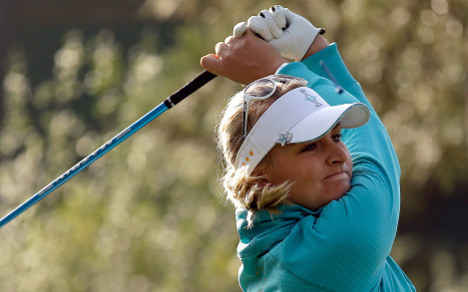 In a thrilling battle at the Siam Country Club Old Pattaya Course,Nordqvist, who led the event from the first round, held her nerve to notch her third LPGA title and her first win since 2009.

The Swede finished 15-under with a four round 273 (66-72-67-88), two up from South Korean defending champion Park whose birdie-studded final round 66 was just not enough to claim victory.

But she finished with an impressive overall 275 (71-71-67-66), securing her place at the top of the rankings after a disappointing run of results had imperiled her status as the world's top womens' player.

Scotland's Catriona Matthew was two shots further back after a championship 277 (76-71-65-65), while America's one-time teen star Michelle Wie rattled in three birdies and an eagle to finish with a 69 and 278 overall.

Nordqvist had to draw on all her reserves to win the $225,000 prize-money, with both Park and Wie playing some of their best golf for a while.

"I am so happy to finally break through again," Nordqvist, who admitted that her disappointing form last year made her almost give up the game, told reporters.

"Michelle played so great and In-bee was pushing me all the way I knew I had to stay strong."

Both Park and Wie came within one shot of Nordqvist at the turn, but she held them off in determined fashion.

"I'm just so excited to get a win here and look forward to the rest of the year."

Holding a four-shot overnight lead, Nordqvist appeared to be going smoothly until a double-bogey at the fifth saw her come under pressure, first from Wie and then Park.

The trio reached the turn separated by just two shots, setting up an intriguing battle on the back nine.

There was high drama at the 10th when Wie converted an eagle, while Nordqvist and Park sunk birdies.

Facing a serious challenge, Nordqvist rose to the occasion in style as she birdied the next two holes to pull three clear of her nearest rivals.

Wie then began to fade, leaving Park as the main challenger, but another birdie at the 15th, her fourth in five holes, gave the Swede some breathing room.

Over the final three holes Nordqvist remained in control, finishing up with 15-under par, two clear of Park.

Scotland's Catriona Matthew made a late charge with her second successive 65, but the veteran Scot just fell short,finishing in third place on 11-under, four shots behind Nordqvist.

Also sharing fifth spot were Taiwan's Tseng Ya-ni who is showing a welcome return to form and Paraguay's Julieta Granada.

One of the pre-tournament favourites, Norway's Suzann Pettersen, had to settle for 10th place, despite shooting a 66 in the final round.