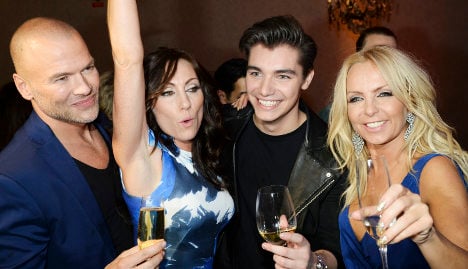 “ETT! ETT!” screams someone in the crowd, with a distinctly un-Swedish voice. Before the pub erupts into massive cheers as Alcazar goes ‘direkt till finalen’.

At a loss as how to make this year’s Melodifestivalen in any way less of an ordeal, I’ve come to the Harcourt Arms pub in London’s Marylebone district. Long known as ‘the Swedish pub’, it’s located across the road from the Swedish Church and around the corner from the Swedish embassy. And for six weeks every winter, the Harcourt Arms turns a little pinker from 7-8.30pm when the TV screens are tuned to SVT1. It’s a bit like going to a sports bar to watch ice hockey. Except the hairstyles are a lot better, if the aggression is about the same.

The Melodifestivalen crowd in the pub these days is predominantly British – for some reason, the exuberant, Eurovision-loving gays of London reacting boisterously to glitter och glamor appears to have driven away most of the Swedish clientele for these Saturday nights. This does have one particular benefit this year, though. When the majority of your fellow viewers don’t speak Swedish, they tend not to listen to anything the presenters have to say, preferring to talk loudly to their friends. So I have no idea what happened in any of the ‘comedy’ sketches! Bonus.

The Harcourt punters tuned in to the action in Örnsköldsvik want schlager, and they certainly do not want rock. And they get it, for once, as the music continues to compensate for everything else in this year’s poor show (in my opinion, of course). Veterans Alcazar and Linda Bengtzing unsurprisingly receive the loudest cheers, followed by relative newcomers Anton Ewald and Janet Leon. Her latter’s eight-place showing does not go down well in the bar – with reactions of dismay when Ammotrack goes through to andra chansen. But this is a crowd that is more than prepared for a schlagerfiasko, so when Linda Bengtzing exits the competition, it’s with a half-expected sigh. What would have happened if Alcazar had been fifth is another matter entirely, though.

As soon as the credits roll, the sound is immediately cut off and Melodifestivalen hits of years gone by play out until closing time. It makes it all a lot better, too.