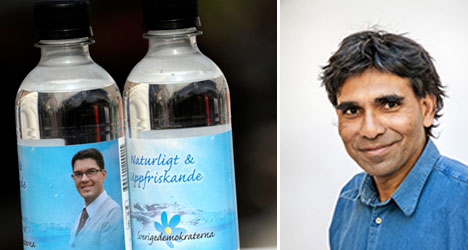 Two years ago, I joined the Sweden Democrats. As an immigrant from a non-Western country, it has been a difficult journey as I spent time with people and politicians whose aim was to get rid of and deport people like me. Today I feel I have been naive and that I committed a grievous blunder. I want to publicly apologize for my naiveity.

I joined the Free Press Association because I wanted to fight for freedom of speech, but today I feel that I was used. My immigrant background has been used to justify hatred and racism, and to defend a narrow-minded nationalism. I no longer want my name and my qualifications used for such goals.

I naively believed that nobody would be discriminated against, neither on religious nor political grounds. That is why I decided to listen without prejudice to what the xenophobic politicians had to say. And that is what I did, but now I feel that it's time for me to apologize publicly and to warn others who are as naive as I was.

Were my actions in line with the idea of human rights? That is the difficult question I have asked myself. There are elections in Sweden in 2014. Do I want to use my vote to change the last country in Europe that has a generous immigration policy, a country that is known for its respect for human rights? Do I want to change it so it is no longer these things?

No. My conscience will no longer allow it.

Freedom of speech is a fundamental human right, but it's also important to use freedom of speech to argue for tolerance, not for intolerance. I thought the Sweden Democrats wanted to work for integration, but now I understand that they want assimilation – they want people to forget their roots.

At this point, I have lived half my life in India, and the other half here in Denmark and Sweden. On several occasions I have witnessed racist attitudes both from normal people and from the authorities, both in Denmark and in Sweden. Racism is a problem, and it is a growing problem, all over Europe. We must draw attention to it.

But the Sweden Democrats deny its existence.

I've been invited to several events where Sweden Democrats have been nice and friendly, but I feel European politics must pay extremely close attention to what narrow-minded nationalism can bring. We must not forget that millions of people in Europe have been killed in the name of nationalism in the last few hundred years.

It saddens me that the Sweden Democrats, who invited me to join the party, probably invited me with the intention to use me as a cover.

That is not the only criticism I have of the party. It must give more room to women candidates and pay more attention to issues important to women, for example, in order for the party not to become a closed top-tier club for young men to throw out members who threaten their power, rather than respecting democratic principles.

For these reasons I have decided to quit the Sweden Democrats. I have also decided that I will no longer write on the site Avpixlat, where I have been a frequent columnist.

I want to be an independent writer and I want to spread the message of tolerance and multiculturalism. I want to use my education in the human rights and democracy to make life better for the weak and the poor, not to strengthen nationalists.

Nationalism is not the answer to the challenges we are meeting in the 21st century.

I would therefore like to apologize for my actions, which may have served as a bad example for others who want to fight for a better world. It is time for me to move on.

This op-ed was originally published in Swedish by the regional Sydsvenskan newspaper in Malmö. Republished courtesy of the author. Translation by The Local.