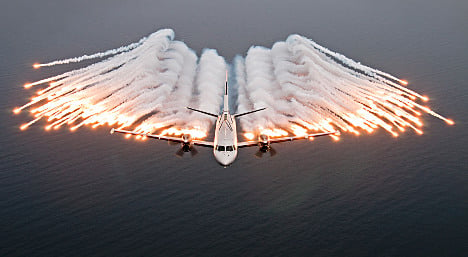 Following news this week of soaring Swedish defence sales, we take a closer look at who is buying what.

Both Thailand and South Africa have bought Sweden's prize defence asset, the Jas 39 Gripen fighter jet, with talks underway with Brazil and Switzerland, where the controversial deal has been tied up in a citizens-initiative referendum.

Despite the Swiss delay, the fighter jet comes out on top as one of Sweden's biggest money-spinning defence exports. It also brings in cash when Sweden rents out planes to other countries.

"The Swedish state has entered into leasing deals with Hungary and the Czech Republic, and that doesn't show up in export statistics but accounts for a lot of income," Swedish Agency for Non-Proliferation and Export Controls deputy director Jan-Erik Lövgren told The Local.

The Saab press team obviously has a poet on board as its website has this to say about Sweden's signature jet: "Gripen is no ordinary fighter. It is your pride. It is your wings." The jet was introduced to the market in 1997, which was only fours year after a prototype crashed over Stockholm. The pilot, thankfully, survived. As did future sales.

Watch amateur footage from the Jas Gripen crash in 1993

The second-best seller is Hägglunds Combat Vehicle 90. Norway, Finland, Switzerland, Denmark, and the Netherlands have all parted with cash to buy it, ISP head Lövgren noted. But why? Well, notice the northern postal code on all those destinations… the combat vehicle is designed specifically for winter climates and can carry up to eight soldiers and all their gear.

The third-best seller marks a double whammy in the top three for Saab, with its airborne early warning and control system.

"Another big product has been the airborne radar Erieye, which sits on the roof of a small passenger plane. That's been sold to Pakistan, Saudi Arabia, and Thailand," said Lövgren.

While the Jas 39 Gripen, the Hägglunds Combat Vehilcle 90, and the Eriey together make up 42 percent of all exports, there's no shortage of other products that have stood the test of time. In February 2014, Saab announced that the US military had made its Carl Gustaf grenade rifle standard issue. It's an export that has stood the test of time.

"The Carl Gustaf was first launched in 1948," Lövgren noted. "So last year that made it 65 years on the market."

Looking further back, the Swedes were big on the naval front.

"What was once Swedish company Bofors, and which is now BAE Systems, sold a lot of naval artillery," Lövgren said "It was really a big product."

Saab to this day is an important naval supplier. Call it a naval warfare dashboard, if you want, Saab describes its 9LV as a system that "brings you all the ship sensors, weapons and communications into a single, highly-integrated entity at your fingertips".