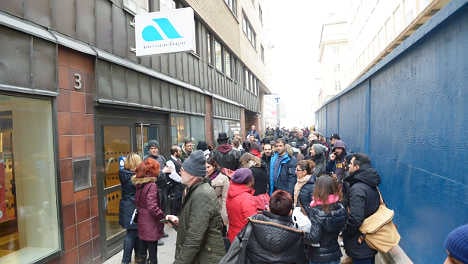 Photo: Bertil Enevåg Ericson/TT
Tens of thousands of Stockholmers flooded to the central offices of the jobs agency on Wednesday afternoon after 60 times too many people were invited to a sales training course for job seekers.
Police had to be called in to deal with the crowds outside the agency's offices on Tunnelgatan, a narrow central Stockholm street. According to Aftonbladet, a member of staff used the panic button to call for help after the offices were overwhelmed.
Police spokesman Ulf Lindgren said feelings were running high.
"By the time we arrived on the scene things had calmed down," he said.
The head of the agency, Clas Olsson said he was sorry for wasting people's time:
"They've taken their time, which is valuable – even if they are unemployed. And they've been waiting in line and it's been a bit chaotic. It's unacceptable and I understand if they feel badly treated."
Olsson said it was unclear what had caused the error:
"Something went wrong. Either it was human error or something technical that led to the invitation going to far too many people who shouldn't have come to this meeting," he said.
Eeva Vestlund, the head of the Stockholm office, apologized for the incident.
"We're very sorry people came unnecessarily," she told the Aftonbladet newspaper on the scene.
"I understand they're disappointed with us. This has never happened before and won't happen again."