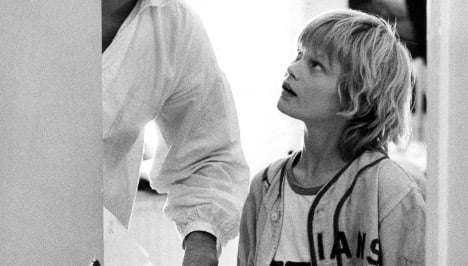 Actor Thomas Fryk in Children's Island. Photo: Gunnar Lantz/TT
The 1980 film Children's Island (Barnens ö) was based on the life of an 11-year-old boy at the onset of puberty. The movie was widely praised in Sweden winning a slew of awards. It was directed by Kay Pollack, who later went on to make As It Is In Heaven.
But the scenes in Children's Island featuring full frontal nudity of the young boy have left the Australian Federal Police crying foul, reported the Sydney Morning Herald newspaper. The police applied to Australia's Classification Review Board, which then agreed to refuse classification for the film, a move that effectively means the film is banned nationwide.
The board ruled that a 49-second sequence showing the boy masturbating "was likely to cause offence to a reasonable adult". The film also features a close-up of the boy's erect penis, as well as several scenes where he poses nude.
SEE ALSO: Sweden's ten most disturbing films of all time
Those who sell or show the film in public risk up to ten years in prison or a fine of A$275,000 (US$245,000).
An Australian advocate of free speech, Chris Berg, was unimpressed by the decision.
‘‘It is a bizarre and rather extraordinary overreach by the AFP [Australian Federal Police] to go to the Classification Review Board to censor movies," he told the paper. "If they believe this is genuine child pornography they should contact their state colleagues and ask them to pursue it. If they are just concerned about offence, then that is none of their business."
"It is not the AFP’s job to protect people from taking offence," he added.

FOOTBALL
Could Zlatan Ibrahimovic go to Australia for one last hurrah?
Url copied to clipboard!