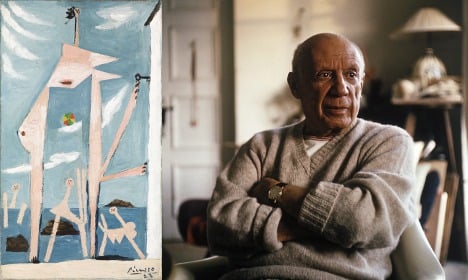 One of the Picasso paintings, Baigneuses au ballon, and Pablo Picasso himself in 1968. Photos: Moderna Museet/TT
The gift comprises eight artworks donated in the last will of Elisabeth Bonnier, whose husband Gerard Bonnier (1917-1987) was for more than 30 years the head of the Bonnier group, publisher of three of the six national newspapers in the country.
Gerard Bonnier was a prominent art collector and had himself donated 23 pieces to the same museum, which are "the backbone" of its collection of early modernism, the institution said in a statement.
Among the eight pieces donated by his widow is Picasso's painting "Baigneuses au ballon", part of a series the artist painted during a stay in Dinard, France in the summer of 1928.
The second work by the Spanish master is a gouache called "Deux personnages", from 1939.
The other six pieces are a painting ("Otage") and an untitled sculpture by French artist Jean Fautrier, a gouache ("Will weg, muss weinen") and a painting ("Der Wald") by German artist Paul Klee, an oil on canvas ("La Chope") by Spaniard Juan Gris and a marble entitled "Torse de femme" by Frenchman Henri Laurens, all created in the first half of the 20th century.
"Art like this is practically impossible to buy nowadays, and it is a great privilege to experience such generosity. The donation is fantastic news to all art lovers in Sweden," said Daniel Birnbaum, director of Stockholm's Museum of Modern Art.
A closer look at the painting