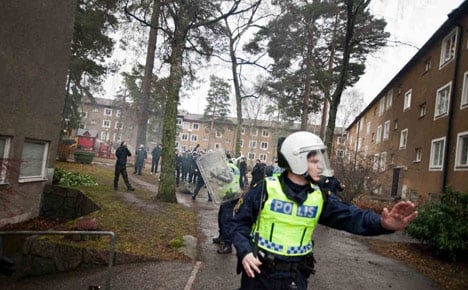 Police spokesman Kjell Lindgren said officers knew of no specific threat against the trial, but the twenty some journalists and other members there to observe proceedings had to pass through airport-style security checks to enter the court room at Södertörn District Court, just south of the capital.

"Because there was quite a bit of trouble in Kärrtorp, we have to be prepared for the same here too," he said.

Seven men are standing trial for their suspected roles in a violent altercation in the Kärrtorp neighbourhood in mid-December. Three are described as key figures in the Swedish Resistance Movement (Svenska motståndsrörelsen).

SEE THE VIDEO FROM THE ALTERCATION

"An authorized demonstration was attacked by around 30 people, who even attacked the police on the scene," Lindgren said after the heavy-handed attack when police and demonstrators forced the neo-Nazis into a nearby patch of forest.

Between 500 and 800 demonstrators, according to the organizers, had gathered in Stockholm's southern suburb of Kärrtorp to protest against the spread of racism in their neighbourhood.

"I was giving a speech when the Nazis came and started throwing bottles and crackers at the families," Students Against Racism member Enzo Nahuel told news agency TT at the time.

Witnesses told The Local that the many children at the event had been so startled by fireworks and crackers that they began crying.

The original demonstration was organized by the Line 17 Network, an umbrella civic organization that had warned over the increasing presence of Nazi propaganda in the area since last summer. The attack lead to an even bigger anti-racism demonstration, with several key political figures in attendance.