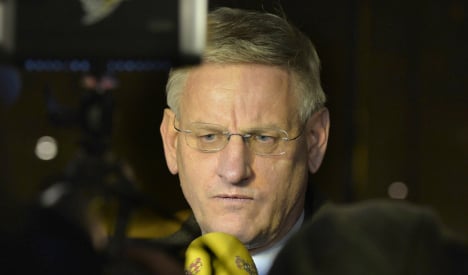 "What's happening now is a violation of international law, it is not compatible with the principles we have for European security," Carl Bildt told reporters in Stockholm on Saturday evening.

"It is very serious," he added.

The Swedish foreign ministry has summoned the Russian ambassador to Sweden for "blunt talks" after it emerged that Russian troops have become involved in the Ukrainian province of Crimea.

The crisis in Ukraine has intensified in recent days and the Russian parliament voted on Saturday to approve President Putin's request to deploy Russian troops to Crimea, a semi-autonomous region in southern Ukraine. This vote was interpreted by Bildt to be confirmation of Russia's intervention.

"During the afternoon President Putin confirmed that this is a Russian military intervention by officially requesting such approval from the Russian Federation Council," Bildt wrote on his blog.

Russian troops are reported to have occupied the parliament building in the Crimean capital and replaced the sitting prime minister with the leader of a pro-Russian party which garnered four percent of the votes at the last election.

There are also reports that Russian troops clothed in unmarked uniforms have demanded that Ukrainian forces hand over their arms and leave the region.

"There is no doubt that what is happening now is a scarcely camouflaged Russian takeover of Crimea," Bildt said.

Carl Bildt is set to join European foreign ministers on Monday to discuss the crisis, which he described as the "worst European crisis in a long time".