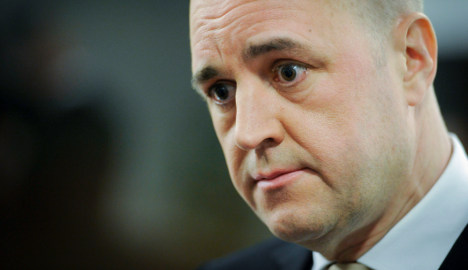 "The Social Democrats try to pretend the Left Party doesn't exist, which becomes even more complicated when the Left Party is rising in the polls," Fredrik Reinfeldt told the business daily Dagens Industri (DI) on Monday.  "On what grounds can they claim that the Left Party shouldn't be taken into the equation? They are completely dependent on the Left Party's votes to make this work."

With elections on the horizon, Reinfeldt faces the task of keeping his right-of-centre government coalition afloat. While 43 percent of Swedish voters told pollster Demoskop recently that they had confidence in Reinfeldt, the percentage of Swedes who said they will vote for his Moderate party or one of its three partner parties has crept down to 39 percent.

The same late-February poll from Novus showed that the Red-Greens, the bloc nickname of the Social Democrats working in conjunction with the Green and Left Parties, have now secured more than 50 percent of voter support.

The Social Democrats announced earlier in the year that they would go it alone, with no official collaboration with smaller opposition parties, but Reinfeldt does not buy the rhetoric.

"I heard an interview with (Left Party leader) Jonas Sjöstedt the other night when he said he was already pondering which ministry they should exert influence over and what minister posts they should demand."

The claim that Social Democrat leader Stefan Löfven was not being honest about the reliance on the Left Party was just one point on Reinfeldt's list of criticism. For example, Reinfeldt said that the traditional workers' party was flirting with protectionism, which he said could endanger future Swedish exports.

He responded to criticism that his Alliance coalition had "run out of ideas" by suggesting that a steadfast reform agenda offered little headline fodder.

"It's the price we pay for taking responsibility for public finances and not overspending," he told DI.