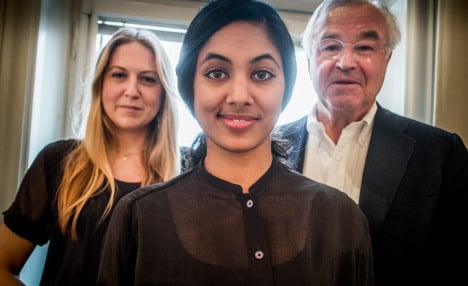 AllBright, an organization that promotes diversity in the workplace, released its annual "Black List" of companies that have only men on their boards.

Researchers found that 82 of 253 Swedish companies included in the overview had not a single women at board level, yet women's representation did creep up somewhat overall last year.

"But it was disappointing at the same time as it is moving very slowly," AllBright CEO Amanda Lundeteg told The Local.

READ THE FULL REPORT: AllBright names and shames black-list comanies with no women on their boards (in Swedish)

The lobbyists called the 0.7 percent increase in executive women "modest" – reaching 18.5 percent last year. The report also noted that women headed 15 of the 253 surveyed companies. The number of boards with one woman outnumbered the boards that sported none for the first time, which gave rise to the name of the 2014 report – "The New Norm".

The report authors criticized the focus on women breaking through the glass ceiling, rather than discussing what persons above that ceiling were doing to shatter it.

"No wonder that the development towards equal representation at top level goes so slowly when the question is so stubbornly discussed as a women's issue," the authors wrote.

Lundeteg said that AllBright's aim was "to change the attitudes of the CEOs" and help change the recruitment process of executives.

Companies with a 60/40 male-to-female split on the board earned a place on AllBright's "White List" – an honour that went to 27 companies, including Proffice and Björn Borg. AllBright also introduced a new Grey List, a nod of tempered approval to the 144 Swedish companies that had one female member on the board.

Boards totally bereft of women, such as Oriflame and Stora Enso, put the companies on the organization's "Black List". AllBright sent letters in black envelopes to the companies asking them to "change their attitudes", Lundeteg said. The lobbyists recommended that the companies put strategies in place to deal with the skewed representation.

To further shame the companies, AllBright sent a list of the blacklisted firms to students across Sweden, telling them not to apply for jobs there.

If the current rate of development continues, the organization noted, it would take until the year 2022 for the black list to disappear.