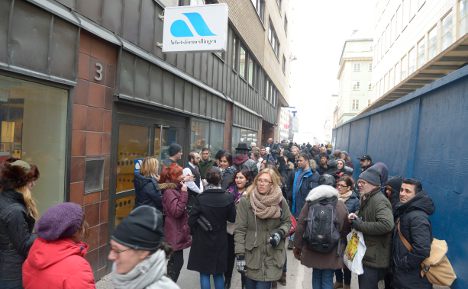 Last week, chaos ensued when thousands of jobseekers tried to file into a central Stockholm office of the national jobs agency (Arbetsförmedlingen). The job agency had by mistake invited 61,000 people to a meeting originally intended for 1,400. A member of staff pressed the panic button to call for police help as the office was inundated.

One would be forgiven for believing that it was all orchestrated as a media event, illustrating Sweden’s persistent problem with labour market exclusion.

In 2006, the government coalition broke a long spell of Social Democrat rule, promising to create jobs. At that time, more than one million Swedes in working age were supported by benefits rather than a pay check, due to unemployment, sick leave, or early retirement.

Workfare reforms have helped bring that number down somewhat, but it still remains at around 800,000 individuals. Arguably, Sweden can do much more to bring down unemployment. The disastrous meeting at the jobs agency illustrates one of the necessary changes: The job agency must do a much better job at matching people with suitable jobs, not just any job.

Salah Haghgo, who works at Stockholm municipality's own labour matching office (Arbetsmarknadsförvaltningen), recently told me that the national agency has major difficulties fulfilling its two main duties: To help the unemployed get jobs, and to provide the labour market with skilled workers.

“The incident last Wednesday in my view proves that,” Haghgo said, adding that the incident made him want to know more about the event intended for 1,400 jobseekers – in itself no slim figure.

"Those 1,400 – were they fully matched to the needs of the invited businesses? How many actual jobs were at stake at this meeting? Were the invited companies and businesses actually asking for 1,400 applicants? What made the agency take this broad approach?”

And is a broad approach the right approach? Definitely not.

Arbetsförmedlingen has billions of kronor at its disposal but many firms are reluctant to even advertise for new employees with the agency.

The reason is simple: If the national jobs agency finds out that you have an open position as say, a chef, their administrators will start informing unemployed individuals they're in contact with. A few might have some relevant experience, training, or education, but many if not most often have no chance of actually getting a job that they would not do well.

A professional agency, in contrast, would make a selection of the best applicants, while Arbetsförmedling not only encourages hundreds or even thousands to go after the same job, but also reprimands any jobseeker who does not apply to available jobs.

The end result is that employers can receive hundreds of phone calls and visits, mainly from people who are far from suitable for the role. Saying "Sorry, we can’t employ you" to person after person is time consuming and, for most people, anything but a positive experience. And receiving this answer hundreds of times is hardly encouraging for the jobseeker.

Last Wednesday’s mistake of inviting 61,000 people to a meeting with a few jobs on offer was a one‑time mistake. But 1,400 is also a lot of people, and illustrates the agency's routine practice.

Arbetsförmedlingen needs to take the task of matching available jobs with unemployed individuals more seriously, or alternatively we need allow private companies to compete with the agency.

Nima Sanandaji, a Swedish writer of Kurdish origin, has written numerous books and reports about policy issues in Sweden. He is a regular contributor to The Local.