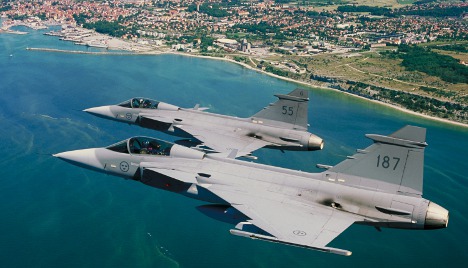 Jas Gripen jets over Gotland in this 2002 file image. Photo: Peter Liander/Saab/TT
"Due to the increased air operations in the area, and especially as a result of the Russian training exercise going on, we've decided to base parts of our regular incident response team on Gotland," Göran Mårtensson at the Armed Forces (Försvarsmaktens) said in a statement.
"By doing this we're increasing our capacity to monitor the skies, which is completely normal during major training exercises."
The Russian news agency Itar-Tass reported on Monday that 3,500 servicemen of the Russian Baltic Fleet were engaged in a "combat readiness" test operation outside Kaliningrad, a Russian Baltic seaport that has been an isolated enclave since the Soviet Union's collapse.
Swedish defence experts said at the time that there was "nothing new" in the announcement.
When pressed by the TT news agency, the Armed Forces' spokesman Philip Simon said that the threat level posed by Russia against Sweden remained unchanged. While he stayed tight-lipped about what kind of military might was sent to Gotland, Simon said that there was "a number of Gripen jets".
Military strategist Stefan Ring said it was natural for the Armed Forces to send aircraft to the island, which is around 250 kilometres south of Stockholm.
"This isn't the first time planes have been to Gotland and it's one of the bases the military has at its disposal for military preparedness," he told TT. "Considering what's been happening in Ukraine, I'd say it would be verging on a dereliction of duty if the planes weren't there now."
Armed Forces spokesman Göran Mårtensson added that they were continually and carefully monitoring the situation in Ukraine, where troops in Russian military gear have surrounded military bases in the southern region Crimea.