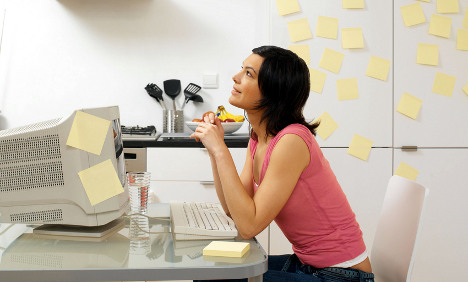 Stock image of a woman at a computer. File: Victor1558/Flickr

Malmö start-up Brisk.io, which creates tools for sales organizations, recently advertised two positions within their company. The firm has been on the lookout for a blogger/marketing position and an outbound sales junior role, and stated in the job listings that they had a preference for female candidates.

"The position is in Malmö (Sweden) and you are fluent in English and are proficient with the technical tools. Preferably you are a woman. Yes, we are biased to hiring women for all positions," stated the advert.

At present, Brisk.io employs one woman in its 10-strong workforce. Co-founder and CEO Hampus Jakobsson told The Local that the lack of females in the office had been the motivation for the biased job posting.

"The idea behind the advert was a collective one. I wouldn't say that it is a policy but a philosophy as we want to create a non-homogeneous work environment," said Jakobsson.

"Men tend to be more T-shaped and less willing to give things a try, whereas women are the opposite," he added. "In general I'd say that women are more tenacious and function better in teams."

The firm has been in operation for the past 18 months and has already attracted $1.2 million (7.7 million kronor) in investment, Jakobsson said. It currently has offices in Malmö and in California.

The co-founder said technical firms such as his tend to be male dominated and he wanted to address the imbalance.

"For tech firms there is a massive male bias of about 90 percent. The 10 percent of women who do work in this industry tend to be in the administrative side and not in research and development. That needs to change," he said.

Jakobsson added that he hadn't encountered any hostility from men to the job advert, but admitted he wasn't sure if it was entirely legal.

"So far all our applicants have been women," he said.

He rubbished suggestions that the male-dominated company was simply keen to employ some 'eye candy' for the office.

"Not at all! That's why we despise the calendars that mechanics have on the wall," he quipped.

A spokesperson for the Equality Ombudsman (Diskrimineringsombudsmannen – DO), the state's equality watchdog, told The Local that would-be employers were not breaking the law if they stated a bias for a particular gender.

"When an employer wants to hire a specific person for a job they need to state that preference in the advert. In this instance it could be that the company is mainly made up of men and they want it to be more gender balanced," a spokesman said.

"However, an employer cannot discriminate on grounds on ethnicity or race as that would illegal."