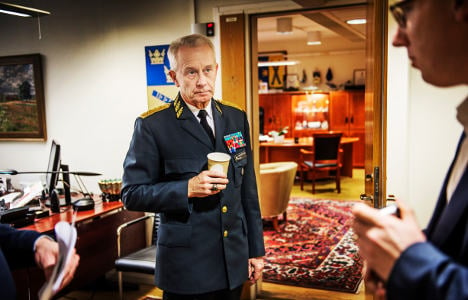 Sweden Deputy Prime Minister Jan Björklund demanded this week that Sweden reviews its defence policy and called for a doctrinal shift following Russian actions in Crimea. On Thursday, the Armed Forces Supreme Commander Sverker Göransson replied that the Swedish military was heading in the right direction in its reform work.

"I stick with my view that we are on the right path with our doctrine and the organization that we are currently building," Göransson told the TT news agency.

Since cancelling mandatory military service, Sweden has moved towards professionalizing its military as well as looking into "pooling and sharing" solutions, in which different nations specialize their military capacity and then jointly contribute to coordinated operations.

Björklund said on Tuesday, however, that Sweden must be able to defend Gotland against Russia in light of fresh fears of Kremlin aggression in ex-Soviet states Estonia, Lithuania and Latvia. In an invasion scenario, the minister argued, Russia could move to occupy the strategically located Swedish island in order to cut off a key potential Nato counter-strike base.

Sweden is a Nato partner, not a member, but the deputy prime minister said the situation in Ukraine should make more Swedes ponder joining the military alliance. He also said it had been a "big mistake" to dismantle Gotland's defence capacity during the rule of Social Democrat Prime Minister Göran Persson.

"You have to build up your fire brigade to the same dimension as the risk of a fire," Björklund said. "How many people thought that Russia would go into Crimea? The same argument could hold true for the Baltic states."

While Göransson rubbished the call for a doctrine shift, he agreed with Björklund that Sweden must take Russian actions into consideration.

"We have a new security-political environment that is very unpredictable," he said. "The reform taking place in Russia shows that they will use military measures when they see fit."

The Swedish air force flew several Jas Gripen fighter jets to Gotland on Monday in response to a large-scale Russian marine training exercise off the coast of Kaliningrad, but said the threat level had not gone up.

The reinforcement was deemed routine by military experts. Göransson on Thursday said there was no need to permanently increase the defence capacity on the Baltic Island.

The Armed Forces, he said, "had very good insight into incidents and developments".