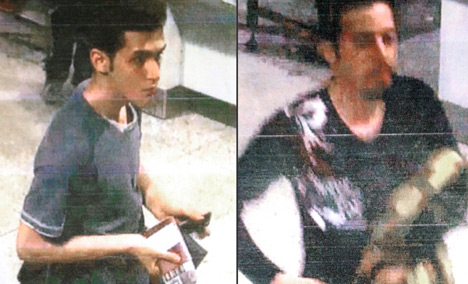 The 29-year-old (R) reportedly on his way to Sweden. Photo: Malaysian Police/TT

A relative of the 29-year-old passenger told Swedish media on Tuesday that the man had been on his way to Sweden when he boarded Malaysia Airlines flight MH 370. He was one of two men found to be travelling on stolen passports.

The Swedish Migration Board estimates that seven percent of asylum seekers show them ID documents that are either stolen or forged, of which a slim total of “two to three percent” are passports.

A person travelling to Sweden may use a stolen passport at the border and then switch to actual ID documents once they apply for asylum. That switch means the seven percent says little of the actual number of stolen passports in circulation among asylum seekers making their way to Sweden.

“It is completely impossible to say how many people travel on look-a-like documents,” Migration Board spokesman Ola Andersson told The Local. “There are no statistics.”

A stolen passports can fetch a hefty profit.

”We have different price estimates, but a fake or stolen passport can cost between $6,000 and $10,000,” said Andersson, who heads a new project at the Migration Board looking at how to identify and archive ID documents.

Not all wayward passports have been stolen, however. There are other reasons a passport ends up in the hands of a person seeking refuge in Sweden.

“If you have family in Syria, for example, of course you send them your passport to get them out of there,” a person with insight into the asylum process in Sweden told The Local on condition of anonymity.

If, however, a Swedish passport has been stolen, its owner can get it onto a digital equivalent of a no-fly list, but for passports not people. The process is simple: Report the stolen passport to police and it will be entered into Interpol's Stolen and Lost Travel Documents (SLTD) database, which to date has around 40 million entries.

“Once it's been reported, the passport cannot be used, so even if you happen to find (your passport) at home a few hours later it's already too late,” Kerstin Högback, passport expert at Sweden's National Bureau of Investigation (Rikskriminalpolisen), told The Local.

As Interpol announced on Tuesday that the two men travelling on stolen passports were Iranian citizens intent on seeking asylum in Europe, the head of the international police body complained that not all airports ran passengers' passport details through its database, which was created in 2002.

“As we work to identify any criminal network which may have facilitated the theft of the passports used by these individuals to travel internationally, it remains of serious concern to Interpol that approximately four out of every 10 international passengers are not being screened against our SLTD database, and this should be a worry for us all,” said Interpol chief Ronald Noble in a news release.

The statement further noted that “terrorists, murderers and war criminals have previously been identified by Interpol as having travelled internationally using stolen passports”. Interpol also said the two men in question likely had no terrorism connections.

While the 29-year-old was on his way to Malmö in Sweden's south, his 19-year-old fellow Iranian was reportedly making his way to Germany. Authorities there report a higher proportion of stolen or counterfeited ID documents among asylum seekers than migration officers in Sweden do.

Nine percent of passports submitted to German migration authorities last year were either faked or had been tampered with, the Office for Migration and Refugees told The Local Germany.

In Sweden, police passport expert Högback noted that certain Swedish citizens' propensity to lose their passports over and over again certainly piqued the authorities' curiosity, but that the police had no power to intervene.

“There are individuals who lose their passports several times a month, in which case it's likely that they sell them illegally,” Högback noted. “Despite these suspicions we cannot prevent them from getting new ones.”

“So let's say that the laws are a bit outdated,” she added. “However, there are other ways for us to make it more difficult for them to get a new one, but that's something I'd rather not discuss right now.”