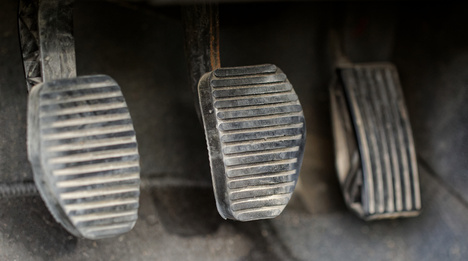 Pedals:Shutterstock.
The man, 30, was fined 3,600 kronor ($565) on Wednesday after he was caught in Karlshamn driving 125 kilometres an hour in a 90 zone.
When interrogated by the police, the truck driver said he should be excused due to his biologic make.up.
"I suffer from chronic clump foot in my right leg," he said, reported the Blekinge Läns Tidning.
The court disagreed with the man's analysis of his own predicament and insisted that he pay the fine.
Clump foot, sometimes referred to as talipes, is a birth defect that can be cured if treated early. Those suffering the deformity have one or both feet pointing inwards at the ankle.
One in 1,000 children suffers from club foot. Some studies suggest that the death of Egyptian King Tutankhamun was related to a club-foot deformation.