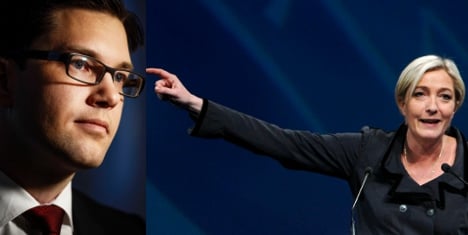 Many of us choked on our morning coffee this week when reading an interview with Sweden Democrat party leader Jimmie Åkesson in the business newspaper Dagens Industri. He praised the leader of the National Front and suggested that the Sweden Democrats could collaborate with the French party's representatives in the European Parliament.

Åkesson issued a denial the same day, claiming that he had been misquoted, but on the website of the party's own newspaper SD-Kuriren readers can take a look at a transcript of the interview. Åkesson says in black and white that he thinks National Front leader Marine Le Pen is leading her party in a “modern, quite fresh direction” and that he does not rule out collaborating with them.

The figurehead of French racism is not only the party leader of the National Front, she is also a member of the European Parliament. Thus Le Pen is very much aware of how important it is to belong to a party group in the European Parliament. It guarantees a platform to make yourself heard, it guarantees resources, and a set number of seats on the parliamentary committees, and it gives power in negotiation bills put forward to parliament by the  European Commission and the national governments.

That is why Le Pen, along with Geert Wilders who is the leader of the Dutch Islamophobic Freedom Party, is fighting to form a party group. Twenty-five seats are required to do so. Recent opinion polls suggest that the National Front could increase their seats from the three they have today all the way up to 20. That means Le Pen's influence of a party group's political agenda will be significant.

While Marine Le Pen has polished the appearance of her party, she has hardly steered it in a "fresh" direction, to borrow Åkesson's turn of phrase. Behind the facade, the National Front is still the same racist and deeply nationalist party that it always has been. Immigration and the EU are described as threats to the nation that consume French identity.

Marine Le Pen's father, Jean-Marie Le Pen, who founded the party, has denied the Holocaust and the crimes committed by the Nazis on several occasions. The anti-Semitism has been toned down by his daughter for tactical reasons. The hate is directed at Muslims and Islam instead. Only four years ago in an election speech, Marine Le Pen compared Muslim prayer meetings on French streets to the occupation by Nazi Germany during World War II.

She refused to retract what she said despite a storm of protests. A preliminary probe into whether she had incited racial hatred was opened, and in July 2013 the European Parliament decided to revoke her immunity as parliamentarian so that she could be prosecuted. In September. Le Pen demanded that veils and kippas be banned in public places.

The ties between her party and the Sweden Democrats go back to the foundation of the Swedish party. The French politicians gave financial aid to the Sweden Democrats, whose party secretary Björn Söder has been a National Front member. The bonds of friendship go far back. The Sweden Democrat youth wing SDU met with their French equivalents last summer.

Therefore it was hardly surprising that Le Pen came to Stockholm last autumn to confer with Jimmie Åkesson.

At a press conference in Strasbourg last Wednesday, Le Pen made it clear that the door is open for the Sweden Democrats. "They are free to join our group," Le Pen said after having been asked a direct question by Sveriges Television.

Jimmie Åkesson has to put his foot down. If you vote for the Sweden Democrats, does that mean that you're supporting the National Front and racism? The Swedish people deserve an answer.

"Every man is like the company he is wont to keep."

The words of the Greek tragedian Euripides are appropriate. Åkesson's choice of alliances in Europe says a lot about his party.

Birgitta Ohlsson is Sweden's EU and democracy minister.
This op-ed was originally published in the Aftonbladet newspaper. Translation by Anders Sjölin/The Local.